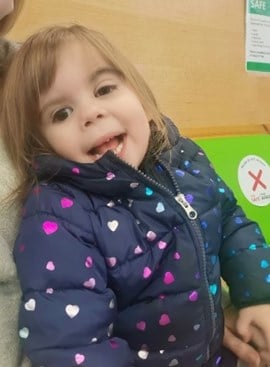 When we got told our daughter was deaf we didn’t know what to expect. The hearing aid didn’t work well for her so we went through the cochlear implant process and due to Alexa’s anatomy she was only accepted for one. In that appointment we got told not to expect anything. We were told: don’t expect her to be able to hear much, don’t expect her to talk, but just remember that whatever the outcome is, she will always be your little girl. They also told us there were two more options for if this wasn’t successful.

At first as a family, we were a little hesitant as to whether we were going to go through with it and didn’t feel particularly positive. But we chose to in the end to see what could happen for Alexa. In May 2019, Alexa was fitted with a unilateral cochlear implant and was switched on in July 2019. When she was switched on, we all felt like she had an instant reaction, though it was only a minor one. We thought against all odds Alexa had heard her very first noise.

We had monthly appointments for six months, and as they came and went, we felt less and less positive. We still hadn’t seen anything, there were no reactions to loud noises, no sudden movements, no blinking, no turning round, nothing. As a parent, all you ever want your child to do is hear your voice, hear you tell them you love them, hear you tell them a story. But as time went on, we accepted the fact that it probably wasn’t ever going to happen. 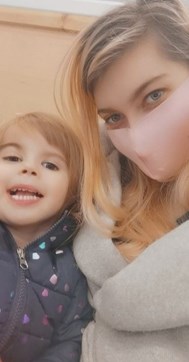 We met with lots of people during Alexa’s cochlear implant journey and everyone agreed there wasn’t much more they could do with her cochlear implant. A suggestion was made to try an auditory brainstem implant (ABI) and a cochlear implant together. After a lot of information, discussions, meetings and research, we decided to give it a go.

You might have seen my last blog about Alexa’s ABI surgery during lockdown, we were switched on in November 2020 and we saw lots of reactions from Alexa at the appointment, so much so that the staff said it was amazing. We started to feel more positive.

We got sent home with three things to monitor. On the second day after switch-on I decided to make some noise by banging a saucepan, I wasn’t expecting anything but she turned round to look at us. At first I thought maybe it was just in my head, so I tried again and she turned. I think I must have tried it about 50 times before I would actually acknowledge the fact that Alexa was hearing what I was doing. Of course, the tears started and I rang and messaged every single family member I could think of to show them.

I emailed some of the videos to the different professionals who look after Alexa, everyone was in shock and told us that this was not expected at all, but Alexa likes to follow her own path and do her own thing at her own rate.

One thing we all know for sure is that Alexa’s hearing is the best Christmas present any of us could ever ask for. It really did turn the worst year into the best.

Kayleigh lives with her partner Kia and their two daughters Brooke (7) and Alexa (2). She is currently studying part-time with the Open University doing Criminology and Forensic Psychology as well as being a full-time carer to Alexa. Alexa, who has microtia and atresia, is bilaterally profoundly deaf and currently wears one cochlear implant. She’ll soon be having an auditory brainstem implant fitted due to the cochlear implant not being successful. They’re all learning British Sign Language and supporting each other through Alexa’s journey.