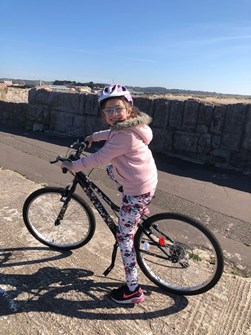 It started when Hattie insisted on playing coach when I went for a jog - aka just faster than a run! She wears two hearing aids and is moderately to severely deaf. Normally she would use her radio aid while cycling if I, or her Dad, were cycling but jogging and microphones bouncing around aren’t a particularly good combination so we resort to other tactics.

Being out and about with the potential of having to cycle on the roads it’s important to have another way of communicating other than shouting. Not only can it be confusing for Hattie to hear what’s trying to be communicated due to traffic noise and wind, it’s also more dangerous for her as she’s not so aware of oncoming traffic, cyclists or people whilst on the pavements let alone the roads.

Before we set off Hattie and I have a discussion about what she’s allowed to do, how far ahead or behind she can go and what hand signals we’re going to use. We practise the hand signals beforehand so she knows what they mean, i.e. left, right, car coming or slow down. Pretty much what they should be learning when cycling anyhow. Then we have the task of putting Hattie’s helmet on whilst being careful to dodge the hearing aids and glasses, a task in itself with the “ouches” and hearing aids flopping off… great fun!

We’re lucky where we live as Hattie only has a short cycle ride on a quiet road before getting to the promenade where the safety goes from being cautious of cars to being cautious of walkers. I like to teach Hattie to respect walkers when on pavements and to stop if need be rather than getting too close and assuming they’ve heard her approaching as after all there are plenty of hearing impaired people in the world, as we all know!

There are some cycle paths around so when available we like to stick to these but when one of us is jogging and the other cycling it can be more difficult to do so. Also, cycle paths don’t necessarily make it completely safe for deaf children as there’s still the problem of hearing approaching cyclists from behind even if they ring their bell.

The jog became more about Hattie cycling and straining my neck to see where she was behind me every few seconds... not much coaching going on but that’s ok, it was good to see her learning how to use the quiet roads, staying to the left (with hand signals to remind her!) and stopping for people walking in front of her on the pavements. Hattie glows with independence whilst cycling and it’s fantastic to see.

Tracey and David have four children Sophie (17), Naomi (12), Hattie (9) and Rhys (2). Sophie, Hattie and Rhys are moderately to severely deaf and Tracey is mildly deaf. We are currently undergoing genetic testing. All three girls are keen sailors and play violin and Rhys is increasing his collection of cars and duplo!