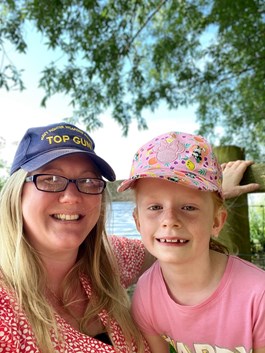 If, like me, you notice that there are gaps in the vocabulary of your deaf child, you might wonder how you can help.

As a big family, we are used to hearing the words, ‘I’m bored!’, especially on road trips. So, we have started using word games to keep everyone occupied and stop the arguing. We find that not only do these games curb the boredom, they also help progress Charlotte’s knowledge of vocabulary, rhyme, meaning, auditory memory and speed of recall.

Here are some of the games we play that you might find useful too.

Shopping list game: Each person starts their turn by saying, ‘I went to the shop and I bought…’, then they add an item, for example a teddy bear. The next person will recall all of the items before them and add a new item. This game is funny as well as engaging – everyone must hold their concentration throughout so that they know all of the items on the shopping list. Memory, imagination and speed of recall are all practised in this game. We’ve found that Charlotte is often one of the best players at this game, as she seems to be able to remember words very well when they’re in stories.

Word association game: Someone picks a topic, for example ‘holidays’. Each player must give a word associated with the topic. Speed and memory is important here as, if you hesitate, repeat a word or give a word the rest of the players don’t feel is linked to the topic, you will lose. This can be tailored to the needs of the child by picking a topic which they need to focus on, or maybe something related to a topic being studied in school.

Yes/No game: One person must think of an item/person/animal, the other players ask them questions to guess what they’re thinking of, but answers can only be ‘yes’ or ‘no’. This game always sounds easy, until you play. It’s difficult to only answer with yes or no, it’s even harder to think of questions that can only be answered by yes or no. This game helps to develop questioning skills, as well as deduction skills. It can also be limited to only 20 or even 10 questions to further test questioning skills.

Rhyming game: The starting player picks any word they like, then all of the other players need to name a word that rhymes with that first word. We have found that Charlotte finds rhyming really difficult – often focusing on the sound of the start of the word, rather than its ending. We usually start with a reminder of what rhyming means – with a very obvious emphasis on the rhyme. Then we begin the game with easier words that have lots of obvious rhymes, such as ‘cat’, and each person takes a turn to give their answer. As we all get more confident in the game, we can move onto harder starting words, which then might have rhymes which involve words that don’t have similar spellings – such as ‘plate’ and ‘hate’ or ‘wait’ and ‘weight’. We allow words that sound the same if the player can give their spelling, which practises another aspect of language that Charlotte struggles with - spelling.

Story game: One player stars this game with an opening story line, for example: ‘Once upon a time, there was a girl called Charlotte who had three big brothers.’ Each player afterwards will add a new sentence to the story and we continue until someone gives a last sentence. This game allows free imagination, but can also be used for role play, to explore a new situation or experience and build the vocabulary for it.

We find that instead of a dedicated ‘speech therapy session’ at home, playing these games works much better as they’re seen as family fun and interaction, rather than work. All of the games can be changed to focus on a specific topic if needed and also done in any place at any time – we often use them while in waiting rooms or queues as well.

Sara and her husband James live in Northern Ireland and are parents to Sam (14), Matthew (12), Oliver (10) and Charlotte (8). Charlotte is profoundly Deaf and wears bilateral cochlear implants, communicating with a mix of speech and BSL. Sara blogs about her experiences on Facebook as 'Deaf Princess' and Twitter @DeafPrincessNI and is leading the 'Sign Language for All' project.