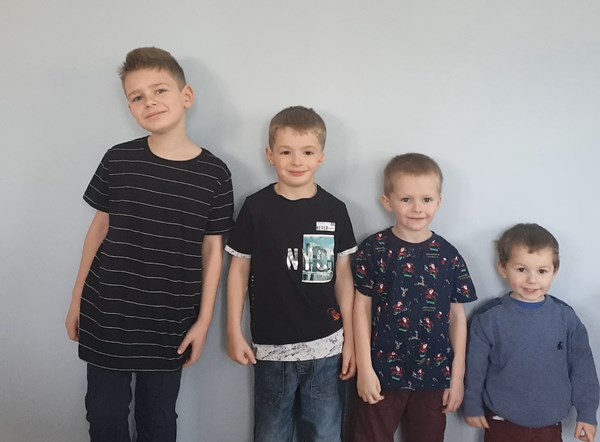 Being a Mum to four boys under the age of 11 doesn't come without its challenges, this can be even harder when one of them has a hearing loss.

My son Charlie was born with left-sided microtia with hearing loss on that same side. He wears a hearing aid and it has helped him a lot with his overall hearing and allocation of sound. Despite the differences, compared to his brothers, he doesn't let it hold him back.

Charlie is son number two out of the four boys and he is nine years old. His brothers are aged 11, six and three. When I was pregnant with Charlie, we had no idea he was going to be born with microtia or any degree of hearing loss. Despite the challenges and the amount of information we had to read up on quickly after the birth, we loved him just as much as his older brother. Fast forward nine years and after adding two more boys to the mix, we now have our hands full, but I wouldn't change a thing. They are my world.

Having a partially deaf child can be difficult on the whole family. I've always had some feelings of guilt as Charlie gets to spend extra time with me due to his many different appointments. However, for Charlie, it isn’t always fun to leave school early, he loves school and he goes back to friends asking where and why he went. I can imagine that the attention at school and special treatment of having a Teacher of the Deaf come to see you every term to do mini tests with you, isn’t always wanted attention, but Charlie never complains. If anything, he tries to raise awareness in school of what microtia is and what it's like to be partially deaf. He will show people his radio aid and hearing aid, and tell them how it magically attaches to his head. Charlie had the Baha Attract surgery at age six. Charlie has always turned what could be a negative for him into a positive. However, his brothers don’t always see it that way and they can get a little jealous! Sometimes they tease Charlie about his hearing loss. Boys will be boys!

Charlie’s microtia and hearing loss has opened other avenues for him, like going to special events, being invited to speak about his experiences or featuring in magazines. I try to involve his brothers when attending these events, to make it more of a family outing, which I can see they really appreciate.

Having three brothers means that quite often Charlie’s hearing aid can go for a walkabout. This results in us losing it for a week or so! Charlie tries to remember to pop it in a safe place (away from tiny hands!) This puts more pressure on him as I do nag him to keep it safe. He's getting better at remembering and the other boys are getting better at remembering not to touch it.

Two of his brothers are under Special Educational Needs (SEN) support, and one of them has been diagnosed with autism, so the house can be very noisy. Charlie sometimes struggles to hear me, and he can resort to staying in his quiet bedroom away from everyone.

These are just a few of our daily struggles and it isn’t always easy. But, despite these challenging times and sibling rivalries, we always get through them together as a team. Having four sons is amazing. People always tell me I’ll be well looked after when they're older!

Tina and Ashley are parents to Harvey (12), Charlie (9), Reuben (7), and Oliver (3). Charlie was born with microtia and has moderate hearing loss on the left side. He wears the Cochlear Baha 5 which uses Baha Attract System.