Primrose's progression: What to expect after switch-on 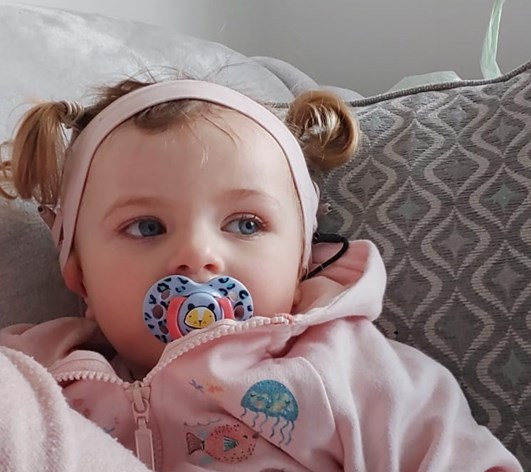 I can’t believe the last time I wrote a blog was in December, sat in the hospital the night of Primrose’s cochlear implant operation. How time flies. How times have changed.

It’s close to five months since Primrose had her implants fitted and it’s probably worth just reflecting on what we’ve seen and what we haven’t seen. For the terror that our darling little child can be, she has been absolutely fantastic during her appointments at the audiology clinic. So much so that within two visits they already had her turned up to the highest settings possible and are now just tweaking things.

It won’t happen like this with every child so don’t panic if yours takes a few more visits. Everyone is different and the introduction of sound after emerging from a world of silence would probably be enough to terrify anyone. With Primrose, if the sound was ever too high during the tests the biggest reaction we got was that she would fidget or blink. These are the things the assessors are looking for to check that the sound is at comfortable levels during the tests. But it might be that your child cries or screams, or plainly refuses to let the show go on. I wouldn’t worry about it if that happens. 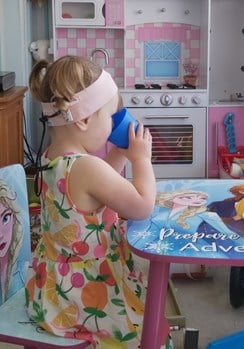 Keeping the implants on their head, that’s the real challenge. If only we were millionaires, I would pay someone to walk around behind her all day putting them back on every time she decides she hates them and tries to hide them or turns into a wet dog and shakes them off! It seems to have become a full-time job retrieving them and sticking them back onto her little head. On average Primrose’s implants are on 10 hours a day, and for only half of that are they actually on her head and passing sound into her brain. As said, some children are obviously going to be better at this than Primrose, some not so good. Persistence and perseverance are the keys to success. A couple of glasses of wine might help to stop you wanting to tear your hair out in the process!

So what have we seen and heard after just five months? Well in truth, not massive amounts. Not that we were expecting any great leaps and sometimes it’s easy to forget that sound has only existed for her for less than a quarter of her short life. Even now we still panic and question if she is actually hearing anything at all?

At this point she has only just, and not all the time I hasten to add, started to respond to her name. Enough times and too regular to call it coincidence. But there is definitely a response to her hearing her name called in a deep, ‘what do you think you are doing Primrose?’ kind of manner. Yes, she only really acknowledges her name when she gets caught out being mischievous. The rest of the time she just plainly blanks me, her mother, and anyone else for that matter. In truth you can sit and poke her for her attention, over and over and over, for a good 30 seconds, and if her attentions are focused elsewhere you just ain’t going to get through! So it is no surprise really she doesn’t respond to her name all the time yet.

In terms of words and sounds though, sometimes we think we can hear a version of Mommy, which sounds like ‘Mermy,’ or Daddy, ‘Dede.’ (Not quite sure whether that is Daddy or dummy yet… dummy being a pacifier, not her insulting me I don’t think.) There are more plosives to her vocabulary now like ‘b’ and ‘d’ sounds and the general squealing and wailing sounds she always likes to make.

Finally her signing is coming on every day and every week. She is particularly fond of signing ‘finished’ after eating and drinking with a big toothy grin. Her cute little thumbs stick up in the air and go round and round. Only a few days ago she signed orange, crunching her fingers back and forth in a ball at the side of her mouth, telling me specifically she wanted orange juice not blackcurrant.

All in all, hope this helps a little bit with what you can possibly expect to see within the first six months of implantation. Which in truth is not massive amounts and if you do find yourself questioning whether your little one is hearing anything and are they actually working, the answer is probably yes. You’re probably only asking the very same cathartic questions that every other hearing parent is asking of their deaf child in the same situation. As ever, even in these difficult times of isolation, you are not alone.

Joseph and his partner Nadine are parents to Primrose (1) who is profoundly deaf and wears hearing aids but is waiting for cochlear implantation. Joseph is a landscaper and enjoys writing prose and poetry, supporting Liverpool F.C. and is still trying to get above 15 points on Radio 2's Pop Master quiz.