How to keep hearing aids on babies 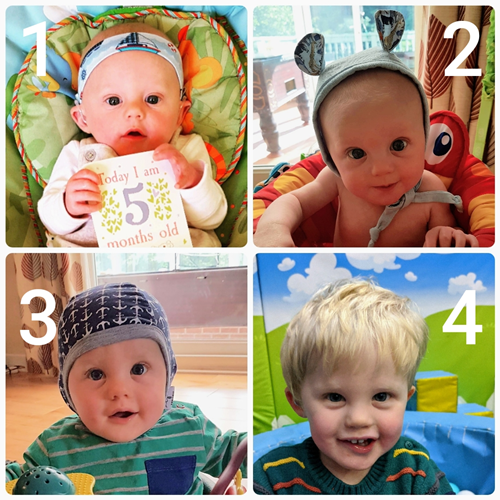 When our son Joshua was fitted with his first set of hearing aids at two months old, he initially kept them in like an angel. We were however warned that this was unlikely to last long, and true to form, one of the first ‘games’ that he learnt after finding his hands was to pull his hearing aids out of his ears and throw them quite an impressive distance!

I have to admit we’d lost his hearing aids on more than one occasion before this, but that was usually due to a Mummy-error rather than a Joshua-error. I’ll never forget the first time I ‘lost’ one of his hearing aids at the end of a baby massage class. I could say with 100% confidence that the hearing aid had fallen out within a 10 minute window but within those critical 10 minutes, the instructor had packed away all of her equipment and I’d walked as far as the coffee shop next door. After two hours of intense searching, I caved in and picked up another pair of emergency hearing aids from the hospital… Only to find the ‘lost’ hearing aid inside his vest when later changing him for bed! After this mishap, I don’t think I’ve ever forgotten to check that the hearing aids are still in place whenever we’ve moved more than five metres!

What hit us when Joshua was four months old was his discovery of a new game. This game involved pulling his hearing aids out of his ears and throwing them on the floor. Not only did the risk of him pulling them out of his ears present a choking hazard, it also greatly increased the risk of us losing them. What concerned me most was the detrimental effect that inconsistent sound could have on his hearing, speech and language development. The year that followed was full of challenges, but I picked up some great tips from other parents before eventually finding solutions that worked for us.

If you have any concerns about your child’s reaction when wearing their hearing aids, of course first discuss it with your child’s audiologist or Teacher of the Deaf, but if they confirm all is fine then here are a few hints and tips that I hope might help others going through a similar situation.

Although I recognise the solutions are unlikely to stop your child throwing their hearing aids out for good, I really hope they might help along the way as you become ninja level at reassembling the hearing aid and finding all the bits! If nothing else, I’m optimistic that patience, time, perseverance and distracting your baby with other fun activities when trying to insert the hearing aids will help and the battles will pass!

I’m overjoyed to say that we’ve now overcome most of these initial battles. Joshua currently wears his hearing aids with confidence as he’s started to realise the benefit they bring and we finally get to see his hair!

Julie and her husband James are parents to Joshua (2). Joshua is severely to profoundly deaf in both ears. He currently wears two hearing aids but has been referred to a cochlear implant centre to explore other options.