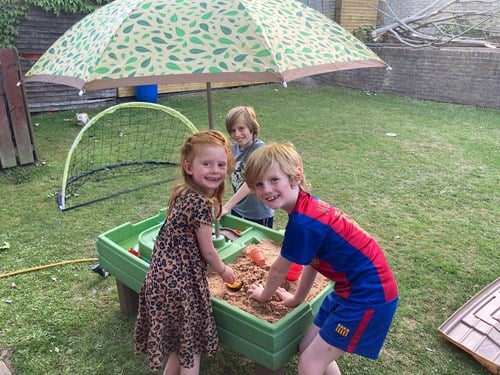 With many things still closed, families are understandably finding life very different and often very stressful. Boredom might be setting in.

Many of us have swapped to online shopping, but with many people on furlough or out of work, money can be a barrier to buying new toys and activities to keep the kids entertained when there’s no school and they can’t spend time with family and friends outside of the home.

My advice – don’t spend money – recycle things from around the house!

Lots of our ‘rubbish’ can be used for arts and crafts. Another bonus is that it reduces the amount of waste going into the constantly full bins.

However, my top tip is about reusing your existing toys. There were toys I thought we’d finished with, some had been passed down from Sam (13) to Matthew (10), then Oliver (8) and are now in six-year-old Charlotte’s room. Ideally at the start of the summer, they’d be part of my annual clear-out and they’d be given to charity or sent to the dump.

A perfect example was Charlotte’s sand table – she got it for her second birthday and it had lived at my parent’s house since then, but due to lockdown, we moved it back home. The children have spent hours upon hours playing at it! I had thought it would be nearly time to give it to another family, but we’ll be keeping it for a while yet.

During this recycle, what’s obvious is the original purpose of the toy might not suit different age groups, but the children have repurposed its use. When the sand table first arrived, it was all about building sand castles and digging holes. Now, it’s about building caves and ‘hideouts’ for little figures to play in and it’s become a base with many wars played in the sand over the last few weeks. The detail in the building has developed to such a high level and it’s clear there’s a lot of thought behind each build.

So, before you dump that toy because it’s too young for your kids, just leave it sitting out for a few days and see what they do with it. Imaginary play is so beneficial to their development and gives opportunities to develop positive behaviours within a safe environment. It’s also given me several opportunities to have a quiet cuppa in peace, while it’s still hot!!

Sara and her husband James live in Northern Ireland and are parents to Sam (14), Matthew (12), Oliver (10) and Charlotte (8). Charlotte is profoundly Deaf and wears bilateral cochlear implants, communicating with a mix of speech and BSL. Sara blogs about her experiences on Facebook as 'Deaf Princess' and Twitter @DeafPrincessNI and is leading the 'Sign Language for All' project.