Photo: Parents offer their tips on how they help their children sleep

Sleeping problems are common in deaf children. Here, parents offer their advice on how they help their child to get a good night’s sleep.

We adopted a special approach... "When they were small, both of our boys were worried about sleeping. We’d try to get them to sleep in the back of the car but they wouldn’t sit there in the dark as they couldn’t see us. It was particularly hard work with James, our eldest, as we didn’t realise initially that it was his hearing that was causing the issue.

They both had a light in their rooms so they could see us if necessary. They have both now said it helped them realise they were in their rooms when they woke up and they didn’t feel as disorientated as they would have had they been in the dark and not able to hear or see anything."

Sleeping through the night is an ongoing struggle... Janis is mum to Martha (6), who is severely deaf and wears hearing aids.

"Sleeping through the night is an ongoing struggle for us with Martha; some weeks we have more success than others. One of the things that’s helped is making Martha’s bed really cosy and warm. She has a crescent moon shaped pillow which cocoons her and her favourite soft toy perfectly. We also make sure she’s tucked in well as feeling cold will wake her.

Something else which helps is having some light in the room. Understandably Martha finds waking up and not being able to hear or see anything disturbing, so we make sure she always has enough light to orientate herself. She has a Gro-Clock by her bed; this casts a reassuring blue light, with a moon face on the clock, throughout the night. At 6am the moon turns into a yellow sun and after that Martha knows she can come in to our bed for a cuddle and a snooze.

When Martha’s sleeping deteriorates, we find a reward chart helps get things back on track. She earns a star every night she stays in bed until the sun shows on her clock. When she’s got around 20 stars, she gets a small toy or one of the My Little Pony or Peppa Pig magazines she loves."

We requested support from Emma's school... Andi is mum to Emma (6), who is severely deaf and wears a hearing aid.

"It’s really important to keep an eye on the stories they’re reading or things they’re watching. Emma’s imagination is wild; we found out even My Little Pony could be scary at times, so now we’re very careful and make sure to explain to her what’s real and what isn’t.

We stick to a routine every day; bath time, story time, cuddles and then sleep. We bought a Mum and Me Baby Sleep Tight Balm which we apply every night; in Emma’s mind this is a magical cream which helps her sleep.

We requested support from Emma’s school, Teacher of the Deaf, family and friends and you wouldn’t believe how things began to change. It also really helped to explain to Emma that mummy and daddy needed to sleep too. We told her how much we love her but at the same time we were just exhausted. I also explained how important sleeping is for brain development – she wants to be a doctor so she needs a fresh brain every day to absorb new knowledge!"

Getting a dog is the best thing I've done... 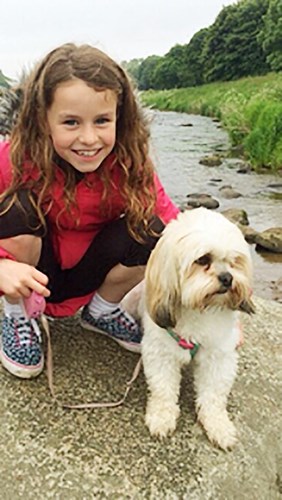 Fay is mum to Ellis-Marie (11), who is severely deaf and wears hearing aids.

"Ellis-Marie was a very happy baby whose deafness never bothered her but about age three we started having major sleeping issues. She would scream when it was bedtime as she was scared to be alone, even with a nightlight on. She would refuse to remove her aids and constantly wet the bed.

I saw a TV interview about hearing dogs when Ellis was six and thought it was a fantastic idea, just what we needed. I applied for one but realised it would take a while as the dogs were only just being trained. So instead I decided to look for a small breed which was easy to care for and self-train. We found a Lhasa Apso puppy from a local breeder and called her Teacup. As soon as Ellis saw her, there was instant love and she’s Ellis’s best friend. From the start she slept in Ellis’s room and we encouraged her to take her aids out as the puppy was scared of the buzzing noise they occasionally made. It took a bit longer to stop her waking up during the night but knowing Teacup was by her side in bed was eventually her security blanket. Getting a dog is the best thing I’ve ever done!"