My deafness didn't stop me becoming an award-winning artist 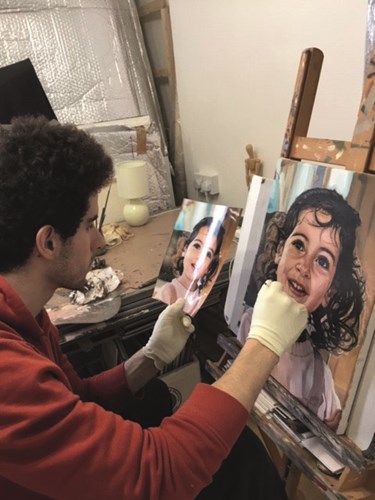 At the age of just 24, Tedi Lena is an accomplished artist – but his career nearly took him down a very different path.

Although Tedi has enjoyed drawing since childhood, after leaving school, he began training to become a car mechanic. It was during evening art classes at the Hampstead School of Art that the school principal, Isabel H Langtry, noticed Tedi’s talent, and awarded him a bursary to study at the school full-time.

“It was a very friendly environment,” remembers Tedi, who is profoundly deaf and wears hearing aids. “I was surrounded by artists of all ages who admired my work. There was a very positive attitude towards me. I was selected as Artist in Residence three times.”

Tedi, who uses British Sign Language (BSL), initially communicated with his teachers through writing, with his mum sometimes stepping in to translate. Later on, the school fought to secure funding for a BSL interpreter for Tedi’s lessons, which helped prepare him to study Fine Art at university.

In 2019, just a year after graduating, Tedi’s work was selected for the BP Portrait Award exhibit at the National Portrait Gallery. “It was a big achievement and an amazing experience, something that confirmed my talent,” says Tedi. Winning the award fuelled his ambitions as an artist and he’s since had his work exhibited in galleries from London to Singapore.

“I want to continue my studies at the Royal Academy of Art. It’s very competitive but that’s my dream.

“When I’m painting, I’m focused. I feel every single line, colour and form. Of course it’s hard work, but I like what I do and it makes me happy.

“My inspiration is nature. I want my painting to express the important message that we must fight now to protect our future.

“I dream to be an art school teacher, but most of all to be me.”