My deafness didn't stop me becoming a fashion designer

Luke tells us about his journey to becoming a fashion designer and founder of his own company Deaf Identity.

When Luke Christian (27) became fed up of explaining his deafness, he found a brilliant solution and launched his own fashion brand.

“Growing up, I was always told how deaf I was and how to act,” says Luke, who is severely deaf and wears hearing aids. “I didn’t know which world I belonged in.

“My fashion line Deaf Identity aims to show that there is no right or wrong way of being deaf. I want to make hearing people realise that deaf people won’t be told, ‘Never mind, it doesn’t matter,’ because it does. We shouldn’t put up with that any more.”

Success didn’t come easily. After studying beauty therapy at college, Luke moved to Manchester to pursue a career there, but it didn’t work out.

“I moved back home a little sheepish and embarrassed that my big dream had failed,” Luke says. His best friend suggested he put his beauty knowledge to use as a blogger. Four years later, with a successful blog under his belt, Luke took redundancy from his retail job and set up Deaf Identity.

The brand sells clothing for all ages and genders, featuring phrases in English or British Sign Language. Clothes are modelled by deaf models or children of deaf adults.

“I wanted to create a brand that championed deaf talent and showed deaf people in a different light,” he explains. 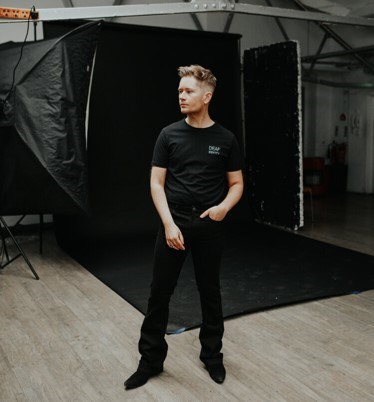 As Deaf Identity has grown, so has Luke’s confidence in his own identity as a deaf gay man. “I used to ‘warn’ dates that I was deaf, as if it was a bad thing,” says Luke. “As I’ve become more secure, I’ve realised if someone has a problem with me being deaf, that’s on them, not me.

“I would tell other young deaf people to embrace who they are. Stay focused, don’t get distracted, do your research and always listen to what feels right for you.”