My deafness didn't stop me becoming a national literature champion 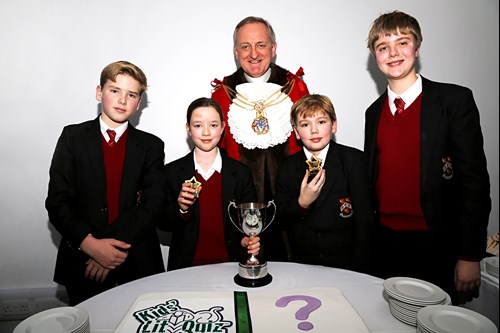 Hal (left) has profound unilateral deafness diagnosed after his parents became concerned about his language development at 16 months old.

“With some adjustments after he was diagnosed Hal learned language at lightning speed,” says mum Ellen. “He’s always loved books and is an avid reader.”

Last year Hal (13) was a member of a four-pupil team from his school to win the South London Regional Kids Lit Quiz competition. The Kids Lit Quiz is an international tournament where secondary school pupils compete in teams to answer questions about children’s literature – anything from The Gruffalo to Dickens.

“I really loved competing with the other schools."

Hal’s team competed against the winners from 17 other regions of the UK to become the national champions! “It was a great experience and I really loved competing with the other schools and meeting some famous authors,” says Hal, who also earned a brown belt in karate and won second prize in a school-wide photo competition in the same month.

Hal wears a CROS aid and uses a radio aid at school and the quizmaster used his radio aid for the competition. “This meant I could hear him perfectly, and I was glad I could, because some of the questions were pretty complicated!” says Hal. “He was fine with it and kept checking to make sure I could still hear him fine.”

This June, Hal and his teammates will be representing the UK in the Kids Lit Quiz World Finals in Canada. “I’m super excited and quite nervous, but I’m sure it will end up being a great trip overall!” he says.