My deafness didn't stop me becoming an award-winning actress 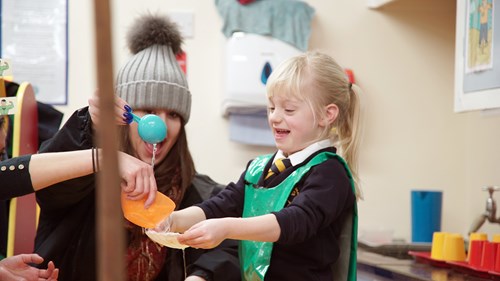 Maisie (6), who is profoundly deaf, had the opportunity of a lifetime last year when she won the lead role in a short film.

“We saw a Facebook status asking for a five-year-old deaf girl who uses British Sign Language (BSL) to audition for a role in a film. Several friends tagged us saying Maisie would be perfect,” explains her dad Gilson, who is also deaf. “We asked her and she wanted to do it.”

The Silent Child centres on Maisie’s character, Libby, who is profoundly deaf. Libby is living in a silent world until a caring social worker arrives and teaches her how to communicate.

“For Maisie the best bit about being in the film was being treated like a star. She was really well looked after by the crew,” Gilson says. “She really enjoyed filming the swimming scenes and the scenes with milkshakes and ice creams in too! It was sometimes frustrating for her to have to do the same scene over and over again but she took it in her stride.”

"Maisie won Best Actress; she was so proud…"

The film has also given Maisie other exciting opportunities. “Maisie and myself were fortunate enough to go to Rhode Island International Film Festival in the USA,” Gilson explains.

“The Silent Child won the award for Best Live Action Short and also, incredibly, Maisie won Best Actress; she was so proud.”

The film and Maisie are now even being considered for BAFTA and Oscar nominations. “Maisie’s pretty cool about this,” says Gilson. “It’s all part of her personality. For us as parents, it’s mind-blowing. We couldn’t be happier or more proud of her and the message the film has.”