Photo: There are around 50,000 deaf children in the UK

Deafness, or hearing loss, happens when one or more parts of the ear aren’t working effectively. To understand this, it’s useful to know how the ear works.

The ear and how it works

The ear has two main functions.

The two functions are closely related. 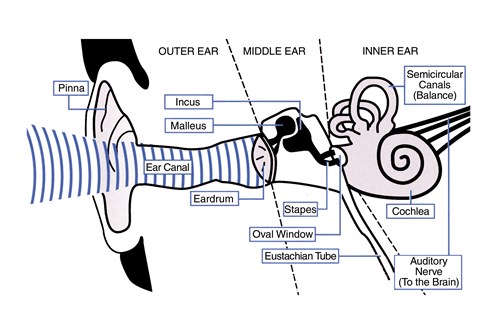 Diagram of the ear

The ear is the first part of the hearing system. The outside part of the ear (pinna) catches sound waves and directs them down the ear canal. The waves then cause the eardrum to vibrate.

These vibrations are passed across the middle ear by three tiny bones: the malleus, incus and stapes (sometimes known as the hammer, anvil and stirrup, known together as the ossicles). The bones increase the strength of the vibrations before they pass through the oval window into the cochlea.

The cochlea looks like a snail’s shell. It's filled with fluid and contains thousands of tiny sound-sensitive cells. These cells are known as hair cells. The vibrations entering the cochlea cause the fluid and hair cells to move, much like the movement of seaweed on the seabed when waves pass over it.

As the hair cells move, they create a small electrical charge or signal. The auditory nerve carries these signals to the brain where they are understood as sound.

For an ear to work fully and pick up sound, all of these parts must work well.

The main types of deafness

Deafness in one ear only is known as unilateral deafness , which can also be referred to as one-sided hearing loss or single-sided deafness (SSD).

Very few deaf children have no useful hearing. Most deaf children can hear some sounds at certain frequencies and loudness, and with the use of hearing aids or implants they are often able to hear more sounds.

Your Community turns one! See what families are saying on Your Community, a new online forum for families of deaf children and young people.