What caused my son's hearing loss? 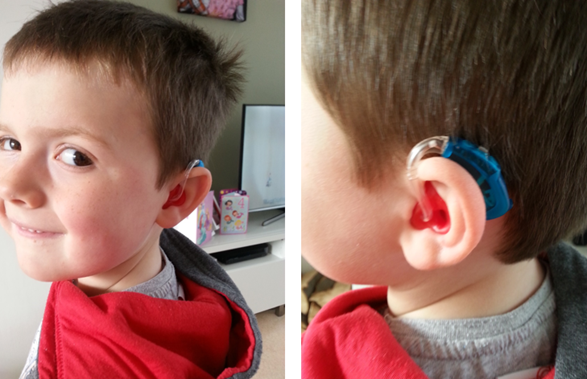 In spring 2016 our son Bodhi (9) came home from school with a letter explaining a routine hearing screening had discovered he might have a problem with his hearing. Our son is gentle, shy and quiet so we assumed he probably wasn’t paying much attention to the test. Although he had help with a speech therapist during foundation stage, we had no worries regarding his hearing.

We travelled to the audiology department at the hospital not really expecting anything. Another set of tests identified that he was struggling to hear female voices and higher pitched tones in his left ear. Surely this couldn’t be true? Bodhi always seemed to be able to listen into mine and my husband’s ‘secret’ conversations and he didn’t seem to be struggling at school. The audiologist explained that Bodhi would need to have a hearing aid and further tests with a consultant.

The audiologist measured up a mould for Bodhi’s hearing aid and he enjoyed choosing the colours that the audiologist produced from a book of designs for hearing aids. There weren’t any boring bland colours like the one his great granddad had, but lots of vibrant colours and designs. Bodhi loved Spiderman at the time and opted for a red mold with the dark blue hearing aid section (pictured above). He was taking it all in and not worrying one bit about having to wear the hearing aid but I was worried how other people would react to him now, could he do the same things as other children? How would we change the tubing on it, replace the batteries and clean this new expensive gadget?

A few weeks after the audiologist appointment, we met the consultant for the fitting and to discuss Bodhi’s hearing loss. Bodhi was unfazed by this new ‘alien’ object in his left ear. We were told to make sure Bodhi wore it as much as possible and how to look after it.

The consultant then started to discuss why Bodhi had moderate hearing loss. To our knowledge nobody in our family had hearing loss apart from his 92-year-old great granddad.

They asked if I had been ill during pregnancy but I’d been the healthiest I’d ever been, and had no issues at all.

Had Bodhi not developed correctly? He’d been born two weeks early but he looked fine to us, and again we hadn’t picked up on any issues.

Did my husband and I carry a faulty gene? Only doing a blood test on Bodhi would discover this.

The consultant decided that an MRI scan would help determine why Bodhi had a hearing loss. The MRI scan would pick up if there were any developmental issues regarding the structure of his ear.

The day of the MRI scan came. I did some research and was terrified of how Bodhi would react. He was only five years old and he would have to lie completely still inside this large noisy machine. Holding back my fears, we were welcomed into the room by two lovely ladies who explained everything that was going to happen. They handed Bodhi a cuddly brown bear and told him to hold it tight with his eyes closed. We were both given headphones and I was allowed to sit with him and hold his hand. The machine began and it felt like forever, but yet again our five-year-old son lay silently still.

The MRI scan results showed that his ear had fully developed and so didn’t tell us what had caused his hearing loss.

During Year 3, Bodhi studied spies and enjoyed holding onto his hearing aid as if it was a spy gadget. His friends thought it was really cool that he had an earpiece. Bodhi was happy and his friends didn’t take any notice of it, he was thriving at school.

The consultant had previously suggested a blood test. This would help determine if Bodhi’s hearing loss was gene-related or from me catching a virus while pregnant. We talked to Bodhi about the blood test and in 2018 we decided to go for further tests. Unfortunately, the blood results came back and couldn’t find a cause for his hearing loss.

I will be forever grateful to the wonderful NHS who discovered Bodhi’s hearing loss. They have supplied him with his high tech hearing aid so that he can hear and continue to learn. I will also be thankful to the National Deaf Children’s Society, I was recommended to visit their website by our audiologist.

Bodhi is still thriving at school and has adapted to using his hearing aid. We still don’t know what caused his hearing loss but the guilt has gone. The only question we ask now is: what colour hearing aid mould will you choose this time? At the moment, he has chosen fluorescent green, which looks a lot like snot to me. But hey, it’s his choice and whatever makes it fun for him to continue wearing it!

Helen and Nick live in Cornwall and are parents to Bodhi (11) and Lani (9). Bodhi is moderately deaf in his left ear and wears a hearing aid. At the weekends you'll find them at the beach fossil and beach glass hunting!