My deafness didn't stop me being a competitive cyclist 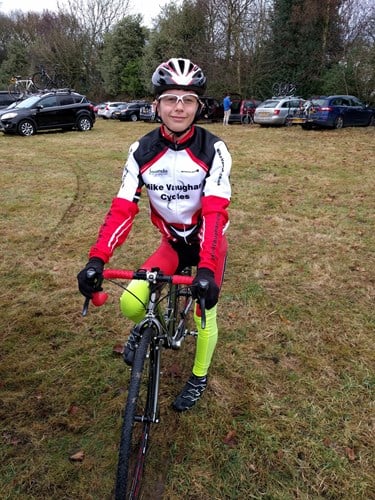 William (13), who is profoundly deaf, has an ambition to become a professional cyclist.

“William always enjoyed messing about on a mountain bike but we didn’t know he had competitive potential until his school took him to the Banjo Cycles Summer Cyclocross in 2013,” says dad Gez. “He won each week and the organisers said he was a talented young rider.” William then joined Solihull Cycling Club and got involved in racing where he’s been very successful, placing highly in many
track, cyclocross and closed circuit races.

William, who has cochlear implants, learns by observing other riders and always sits where he can lip-read his coach during briefings. The family also takes along visual aids such as a whiteboard with markers and magnets. During races they use a flag instead of the last lap bell and signalling whistles.

"My ambition is to race in the Tour de France…"

“Much of William’s achievement is from raw talent and his competitive nature as he’s been to few formal sessions as he’s away at school during the week when cycling clubs train. This could make it harder for him to be competitive as he gets older so we may have to consider one-to-one training,” says Gez. “William has also had lots of support from Mike Vaughan of Mike Vaughan cycles for which we’re really grateful.”

This autumn William will compete in the under 14s West Midlands Cyclocross League and the British Cycling National Trophy Cyclocross Series. William says, “I love racing my bikes. I enjoy cyclocross, track and closed circuit racing. My ambition is to race in the Tour de France and compete in Track at the Olympics.”