How Ezra got his hearing aids 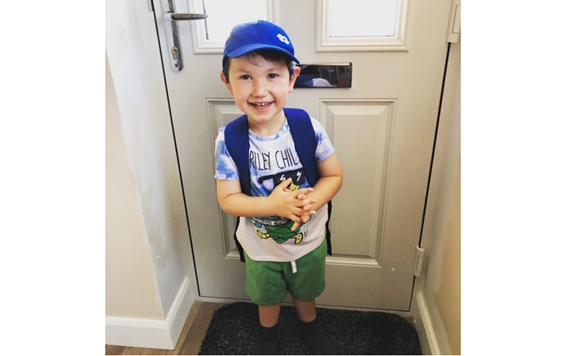 Ezra was born in March 2014 after a very difficult delivery. When he was just nine hours old he stopped breathing, a heart defect was suspected and he was sent up a hospital an hour away from us.

When he was one-day-old he was diagnosed with pulmonary atresia, a very rare heart defect which meant he had to have surgery to open his closed pulmonary valve.

Once he was home from hospital Ezra had his newborn hearing screen and failed. After many visits to the audiology department he was diagnosed with a bilateral mixed moderate loss at around six-months-old. He also suffered from recurrent ear infections, glue ear and very waxy ears!

Ezra had grommets but unfortunately they came out very quickly and he was later fitted with a BAHA hearing aid.

At 13 months old his glue ear subsided enough so he could get post aural aids (behind-the-ear) which he has worn ever since. We were lucky Ezra took to them so quickly and wanted to wear them every day, he hasn’t looked back!

We built up a great relationship with the staff, the universal communication method used (of both sign and speech) suited Ezra’s needs perfectly so we decided we would apply for Ezra to go to the nursery there.

We were thrilled that Ezra was accepted and he started the day after his third birthday. Ezra already knew the staff there and was familiar with the room which helped massively. I decided to learn British Sign Language (BSL) to help Ezra’s communication and have completed Level 1 and 2 and am due to finish my BSL Level 3 very soon!

This has helped Ezra massively. He’s developed into a fast talker and has a lot to say. He gets frustrated when people don’t understand him. We find that asking him to slow down and try to sign more helps but it’s not something he finds easy, we’re working on it!

Ezra is now in Year 1 and doing brilliantly. He’s also been diagnosed with a separate speech impediment which isn’t related to his hearing loss so he sees speech and language regularly.

We are so proud of him and how far he has come thanks to all the amazing professionals that have helped him along the way. We look forward to sharing more of our adventures with everyone!

Laura and her husband Jon live in the North East of England with their sons James, 7, Ezra, 5 and their dog Betsy. Ezra is moderately deaf with an additional speech impediment. Laura is a special needs TA in a primary school.