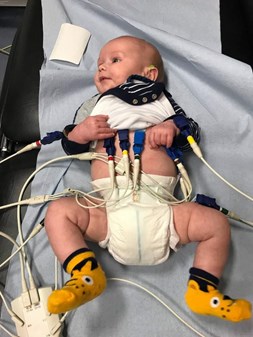 After trying for a baby for some time I was over the moon when I found out I was pregnant on the 30th November 2017. I couldn’t wait to tell my husband. When trying for a baby I had all of these great ideas about how I would break the news to him, but when I saw that amazing word ‘pregnant’ on the test I couldn’t help myself and I ran straight down to catch Jason before he went to work. The pregnancy seemed to last forever, as I’m sure most mums would say, I couldn’t wait to meet our gorgeous baby boy! I had no complications during pregnancy and everything seemed to run very smoothly. On the 31st July 2018, the day finally arrived and Mackenzie was born weighing 8lb 4oz. He was perfect in every way and I couldn’t stop looking at him. I’d never felt so much love for anything in my whole life.

We had a few hiccups during labour, but after 34 hours I managed to find the strength to push him out on my own and our gorgeous little boy was born.

We had to stay in hospital for a couple of days but I didn’t mind as it meant I got to have lots and lots of cuddles and get used to being a mummy. During our stay in hospital, Kenzie received the usual newborn screening test. I didn’t know anything about this service but thought it was a great idea. They put a little plug into his ear with a wire leading to a machine and said they were looking for vibrations in the ear. They looked at me with blank faces and said it didn’t seem to be working. They tried again, but still nothing. They assured me not to worry as it could be something simple like fluid in the ear from birth and they would try again the next day. I wasn’t worried, I knew he’d be fine, I wasn’t deaf so why would he be?

The next day came and the same tests were carried out, this time I felt a little anxious but still told myself it would be fine. The same results came back. They said they would invite Kenzie to attend another testing in a couple of weeks time at the hospital so any fluid would have cleared. I was so overwhelmed and in my little bubble of love, I didn’t really think much about it as I thought it would be OK, but it was a long couple of weeks.

The time came and my husband and I took Kenzie for his appointment. They used the same equipment to test the ears again and I could tell by the look on her face that something wasn’t right. My heart started to sink. She said that they’d received the same result and he would now be referred to the audiology department for more in-depth testing. She assured us that we didn’t need to be worried as only one in five babies referred end up being diagnosed as having a hearing loss.

My husband and I were quiet while walking to the car and didn’t know what to say to each other. Once Kenzie was fastened in his seat and I sat in the car, I broke down in tears. What if something was wrong and he is deaf? It was a difficult time but I ended up convincing myself it would still be OK and there must be an error with their machines. Why would Kenzie be deaf? We have nobody in the family who’s deaf and I’d had no issues with pregnancy and did everything they told me to do. It would all be OK, wouldn’t it?

On the 23rd August, Kenzie had his hospital appointment for his audiology testing. My husband was working that day and we agreed he didn’t need to attend as everything would be fine and that I would call him once we left the hospital. My mum came with me instead. Kenzie was covered in wires, it looked so horrible on such a small little person. I held him in my arms and rocked him to sleep so they could start the testing. The tests seemed to go on forever and I kept looking at the lady’s face while she was testing to see if I could see any signs in her facial expressions. In front of her was a laptop showing the test readings, I couldn’t see much movement and I was getting nervous. I could feel the tears starting to build but I just stayed quiet and tried to hold them in for as long as I could. As the testing was coming to an end, I couldn’t wait any longer and I asked her what was happening. She informed me that Kenzie was only showing signs of hearing sounds at 85 decibels and above, showing a severe hearing loss in both ears. My heart stopped and the tears came pouring out. I couldn’t believe what she was telling me; Mackenzie, my baby boy, was deaf!

I couldn’t stop kissing, cuddling and holding him tight. I kept telling him how much I still loved him and how it didn’t matter and we would be OK. I told him that I would still tell him every day how much I loved him, even if he couldn’t hear me say it. I had everyone in tears, my mum and the audiologist. She gave us a few minutes while we settled down and then we discussed what would happen next. What she was telling me didn’t sink in. All I was thinking about was how I was going to phone my husband and tell him our son is deaf. I kept asking myself; how will we survive? We have no experience of deafness. How will we talk to him? How can I sing to him to calm him when he cries? And then the blame hit me, I thought this was my fault. Perhaps I did something wrong while I was pregnant. I cried the whole way home and couldn’t face calling my husband, he kept trying to call me and he obviously knew something was wrong. I had to tell him and break his heart too.

The next few weeks were difficult, we had to break the news to family members and friends and see their sympathetic looks. It took me some time to get my head around it. I shut myself away for a few days just cuddling my gorgeous baby boy and crying constantly. However I noticed something during these days of crying. Although I was crying and upset all the time, Kenzie wasn’t. He was always happy and smiling. He very rarely cried from the moment he was born, which showed me that he was happy and content and his deafness wasn't upsetting him or bringing him down. He didn't know any different, he hadn't heard sound before. He was used to living in his little world of silence.

I asked myself why I was feeling sorry for myself, this isn’t about me, it’s about Kenzie. He needs me to be strong now for him. I turned my negativity into positivity and focused on what I could do to help him. I spent a lot of time researching the causes of deafness and why this may have happened. I joined groups and events to help gather as much information as I could to help him and give him the best life possible. I still spoke to him like normal, although he couldn’t hear me. It seemed natural to me to talk and sing to my baby and to shh him to sleep.

On the 20th September 2018, Kenzie was fitted with his first set of hearing aids and his reaction was incredible. Watching him hear sound for the first time was such a special moment for us. He was crying while the audiologist fitted the hearing aids and, as soon as he switched them on, there was silence. He was in shock and just kept looking at his daddy as he spoke and then he smiled. Amazing! Our baby boy could hear us and I could not be happier. He’s such a brave little boy and I couldn’t be prouder of him!