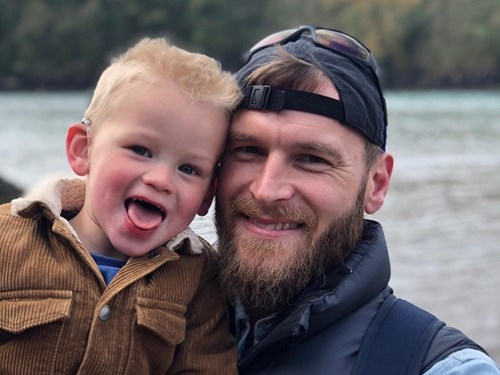 My son Kenzie gave me the greatest gift that I could ever receive by entering the world just the way he was supposed to. Kenzie was born with profound deafness, and being his dad is an absolute pleasure. I’ve learnt a lot about both of us and the way we communicate with each other.

When Kenzie was first born, I got to spend some precious time just us two while his mum was in recovery. During this time, I told him that I was always going to be there for him and that I loved him so very much. I did not know that Kenzie could not hear one word of what I was saying to him. I feel a bit silly now, but I’m sure that he picked up on what I was telling him from the number of kisses and cuddles I gave him.

When the hearing screening equipment came around the room on the maternity ward, I saw a lot of newborn babies have their hearing tested before they got round Kenzie. I saw a lot of green lights and beeps from the other newborns, but when Kenzie was tested, the light on the equipment turned red and made a different tone of beep. This was the first hint towards Kenzie’s deafness and our journey together.

We went home and completely forgot about the test as I had to change another nappy. It was a good few weeks later that Kenzie went for further tests on different dates and was eventually diagnosed with widened vestibular aqueducts through a condition called Pendred syndrome, which primarily effects the hearing and thyroid. This was hands down the toughest moment of my life. When I first found out, I was in a state of shock. I also felt scared, confused, lost, guilty, angry - it felt like the ground had opened up and just swallowed me.

However, it wasn’t long before those feelings drifted away and were replaced with a sense of challenge and a positive approach to tackling how I was going to raise my son and the way I was going to communicate with him.

The National Deaf Children’s Society (NDCS) played a huge part in this as I had the pleasure of being invited to one of their presentations, which showed me that there was a way forward, and a very good one at that. We just had to make a joint decision on which communication method was the best one for Kenzie.

Kenzie had been fitted with hearing aids, and it was amazing to see him hear for the first time. He had the ability to hear some of the noises around him but not the ones for full speech recognition, so I decided to commit myself to my local college where I learnt British Sign Language and the importance of using it with Kenzie. I continued to learn and practice in my own time, and it didn’t take long before it felt natural when I used it with Kenzie. Kenzie learnt how to communicate before the time most children can even talk. It benefitted us both because I could meet Kenzie’s needs much more efficiently as we would just use the signs that we had learnt together. The negative side to this was that he learnt to say ‘no’ earlier than usually!

The next step was to decide if cochlear implants were right for Kenzie. For some people it may not be suitable, and the results after surgery can vary depending on different aspects. We decided to go for the cochlears, because in Kenzie’s case, it gave him a better chance to be able to hear more.

Another reason for our decision was that Kenzie’s condition meant his hearing would deteriorate over time until eventually his hearing aids would be of no benefit. Cochlears ended up being easier to fit in place on Kenzie’s head than hearing aids were. He used to take his hearing aids out and try to eat them or throw them across the room.

Fortunately, the cochlear implant surgery went very well and has given Kenzie the chance to learn the spoken language of English and Welsh. Kenzie and I still use sign language, but usually when he is not wearing his cochlears, such as bath time or in the night when he wakes up for a short while.

Kenzie still has trouble sleeping and wakes up shouting for daddy when he stays at my house, but this is because he had been hearing all day, and when he wakes up he tends to get confused but soon drifts back off. This is progressively getting better as time goes on though. Kenzie has on occasion taken them out when he gets tired of my lectures and wants some peace and quiet, which leaves me feeling jealous as I don’t have that option!

Kenzie is doing great and learning in school at a good pace. He has some support which is mainly for relaying sound that is drowned out by other loud noises.

When I talk to Kenzie, I am always mindful of background noise which may affect how he hears me, but now at three years old, he always tells me to speak up until he is happy. On other occasions, Kenzie has heard noises that I haven’t and has taken me to the source of the noise such as birds singing outside, so I think he can pick up on different levels of sound. The most important thing to me is that he can hear me speak and that I can make out what he’s telling me, whether that be spoken or BSL.

His speech is coming along nicely now, and I am so proud of the little man he has become. He has great confidence and a good mind that soaks up knowledge. He’s such a happy little boy with a robust nature but also kind and caring towards his friends and family and everybody he knows at the same time.

Kenzie is taking part in dance classes at the moment. This is to avoid contact sports which may cause a head injury and could cause complications with the implants. I see this as a move in the right direction as it’s great for his balance and coordination. Also, he’s on the way to becoming a smooth mover on the dance floor in his later years.

I see his hearing condition as a blessing in disguise because he has learnt so much more at an early age, and that really shows now he is three years old. I feel like the proudest dad in the world, and I’m so grateful to be a part of his amazing unique journey.

Jason is dad to Mackenzie (3), who is profoundly deaf. Mackenzie was fitted with cochlear implants in January 2020.