How our bedtime routine works 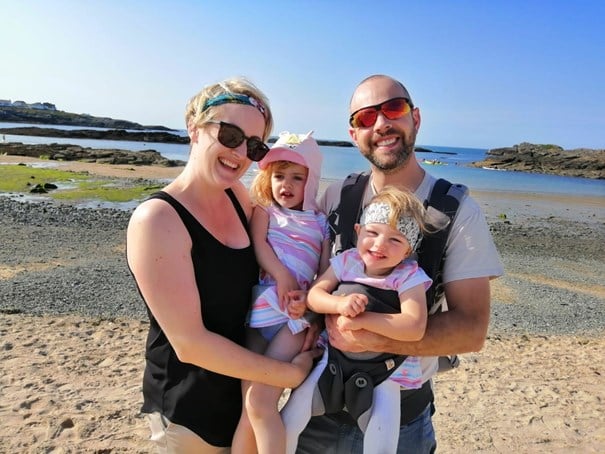 The holidays are over, everyone is back at work and nursery so the morning lie-ins are over. Except, we don’t often have those, because we have two young children. Sleep is something we dream of… ironically. Connie is three (nearly four, as she tells everyone) and is a very articulate, hearing little girl. Olive is two and a half, profoundly deaf, has quadriplegic cerebral palsy and a great sense of humour. She had sequential bilateral cochlear implants (one aged 18 months, one aged 25 months).

I love my children very much and enjoy their company - during the day. But, like most parents, I like it when they’ve gone to bed. It’s a quiet time and means I can tidy up the mess that two pre-schoolers leave in their wake. Or I can sit down and watch TV or finish the half-eaten dinner I left while trying to get everyone else fed. Or, let’s be honest, sit in bed trying to drift off while looking at my phone for far too long.

I have mixed feelings about bedtime. Connie has always been a great sleeper - I was the smug mum who gave advice to others about getting their little ones off to sleep because I had obviously mastered the skill. Then we had Olive. Olive is not a great sleeper (a mild understatement). Because of her cerebral palsy she startles herself awake in the night sometimes. Some nights, just getting her off to sleep was hard, possibly because of the deafness. She fights going to sleep and wants us to stay with her until she drifts off. As a hearing parent it’s hard for me to understand what it must be like for her drifting off to sleep in silence.

Getting them ready for bed gives me that sense of dread because Olive might be easy and go off to sleep no problem, only to wake later and stay up for several hours. Or she may stay up until midnight, smiling and making a lot of noise until finally crying and grumping off to dreamland. I’m not moaning (well, maybe a little) it’s just something we have come to get used to.

We try to enjoy bedtime with them. We have a joint bedtime story most nights, which we often sign as we tend to leave Olive’s implants off once she’s out of the bath (something else to feel guilty about in those audiology implant programming appointments). We try to stick to routine, but we’re no ‘Gina Ford’ family. Dinner, bath, book and bed is what we attempt, but some nights that happens at 7pm and other nights they are somehow only just getting into pyjamas at 9pm. And getting that far is only on the nights we’re both in. If it’s just me, we sometimes all just end up in our bed together - unwashed because I’ve given up trying to do it on my own!

I remember before I had kids, and even when we just had one, thinking how much people complained about bedtimes and how easy it was for us. Now we’re on the other side of those tough wakeful nights, I feel bad for all those people who had told me how hard it was for them and I’d thought ‘it can’t be that hard, surely?!’ I’m paying for my smugness…

Part of the problem is that there is no one size fits all solution. You can try different things but ultimately if your child is a poor sleeper, it’s not as easy as just getting into a good routine. I think Olive is similar to many deaf children and especially those with complex or additional needs. Lots of parents I’ve spoken to have said they struggle with getting their little ones to sleep.

When Olive was a baby, we spent hours each night talking (ok, let’s be honest- arguing) about how best to get her to sleep. We tried different scents in the room, different sleep positions, different night lights - one time we almost bought a special pillow that promised sleep for any child. For the last two weeks we’ve been using Roman chamomile on her bedding and she has slept better, but I’m writing this on the back of a midnight to 4am waking period. Whenever we think we’ve cracked it, things change.

Something we have found useful is the use of sensory strategies. We discovered early on that it’s no myth to say deaf children can have other senses which are heightened. Sometimes I’m sure Olive can sense a wobbly floorboard move from another part of the house. She seems more sensitive to changes in light and temperature while drifting off to sleep and especially to smell. I used to bake a lot, especially in the evenings, but I can’t cook or bake once she is asleep or she will wake up once she smells it. It seems strange to write it, but it’s true.

My husband and I both work with children with sensory difficulties and it was natural for us to consider her sensory needs on those long nights of discussion about how to help her sleep. We tried lots of different things and up to now the most successful has been keeping a calm and consistent environment – people talk about ‘sleep hygiene’. For us it’s just staying in her bedroom when she wakes, keeping the same routine, same lighting and no perfume or strong smelling air fresheners (usually a few drops of essential oil on her bedding) – and using deep pressure. By this, I mean firm touch, usually on her chest or back, that helps to calm her. Kind of like a massage.

My husband and I each have our own way of doing this but both seem to work. Rhys lays her down and pats her firmly and rhythmically on her back until she drifts off (this sometimes works well when she wakes in the night). I sit next to her bed and cuddle her into me firmly, sometimes rubbing my palm down the length of her body and arms, as if she’s getting a massage to sleep. Let’s be clear, we don’t intend on doing this forever. It would be embarrassing for her (and us) if she’s 16 and still relying on this, but for our own sanity we have found something that helps so we’re sticking with it.

I’ll be honest, she still wakes sometimes, but we feel like we’re doing something and getting somewhere. Slowly. And wearily. The truth is, there’s no secret to it. We found something that works for Olive based on what we tried. Sometimes you just have to stick with it and enjoy the nights when they do sleep, even if you have no idea what you did differently. Knowing you’re not the only person in the world whose child doesn’t sleep helps your sanity, but when it’s 3am and you’re up in the dark wondering what you’re doing wrong, it’s hard not to feel alone. Two and a half years in to having very little sleep, I keep telling myself ‘it’s just a phase’ and let’s hope it is!

Jennie and her husband Rhys both work with children with additional needs and live in Manchester with their daughters Connie (4) and Olive (3). Olive has quadriplegic cerebral palsy and is profoundly deaf with bilateral cochlear implants. Olive uses a mixture of sign, sounds and symbols to communicate and Connie uses a loud voice. Jennie likes it when it’s quiet enough to hear herself think!