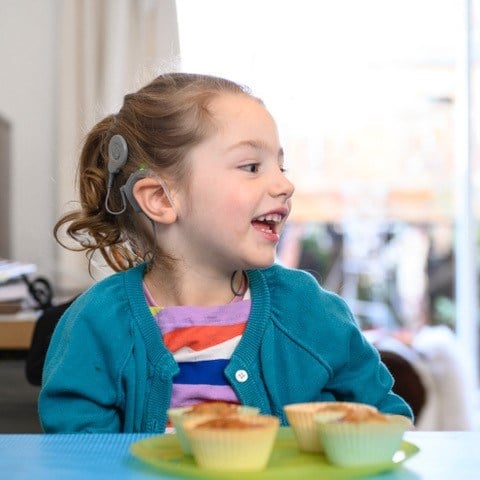 We are at our weekly trip to the shops in our local town centre. I’m chatting/signing away to my four-year-old, Olive, and to the shopkeeper, when he casually says, “I hope you don’t mind me asking, but what’s those wires coming out of her head?”

It takes me a little aback as it seems out of the blue, but in all honesty, I welcome his openness in asking me. Olive is a wheelchair user, so her implants aren’t always as obvious because you can’t see the back of her head easily. What you can see is that she has a processor over her ear and that she has some wires coming from it.

My response to him is to explain, “She’s deaf, but she can’t have hearing aids, so she has implants that send a signal straight to her brain so she is able to hear.” He’s amazed by this, and we go on to talk about how she has one new implant with Bluetooth, and maybe one day when she is on the phone or listening to music, it will stream straight to her implant and I won’t even be able to hear it. We both marvel at this for a moment, and he says again, “I hope you don’t mind me asking, I’ve often wondered what it was when I’ve seen you.”

I don’t mind. I prefer people asking to people staring and not asking. That said, some days I don’t have the energy to be the ‘motherly face of cochlear implants’, educating the world about deafness and cochlear implant users. While we don’t choose these roles as parents, I still feel a sense of duty to answer questions and explain what the implants are, simply because if I don’t, when will they get that chance again? Will the next implant user be upset to be stared at? And by me explaining it now, could I stop that? If I tell that person, next time they might explain it to someone else, and it becomes more ‘normal’ once more people understand.

As a hearing adult with no experience of being stared at in this way, I’m very aware that my approach does not represent all those who have hearing devices. There is also personality to take into account – I’m not a shy person, and Olive’s deafness is no longer something I find difficult to talk about or am upset by. If I were shy, or still coming to terms with having a deaf child, I might find it more difficult to respond when people ask, “What’s that thing on her head?” 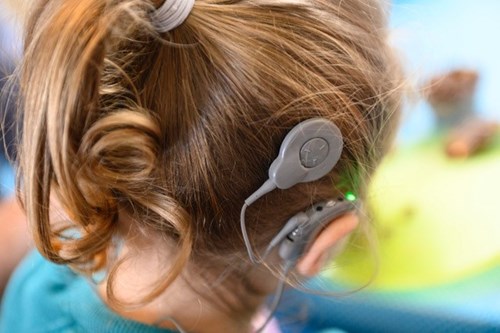 Reactions from adults and children are different. Although I haven’t conducted a scientific study, I’ve noticed that there is an age the reactions typically start to change. At a local kid’s group, the younger children (under 6 or 7) will glance briefly and notice she has something on her head then carry on as normal, totally accepting it. Above this age, there seems to be a shift: the glances last longer, and older children will repeatedly look back and crane their necks to see where the wire goes. If they see I’ve noticed them looking, they instantly look away and seem embarrassed, as if they’ve been caught doing something naughty. It must be around this age that social etiquette kicks in and their parents’ voices saying ‘Don’t look, don’t make a fuss’ come to mind. (Again, no children have been harmed through me unscientifically studying this…)

Olive is oblivious, for now. Her older sister, Connie, has noticed though, and once or twice I’ve overheard her saying to someone with sisterly pride, “It’s called a cochlear implant, it’s to help her hear… it’s just a magnet.”

Now and again, if I see a child looking, I’ll make a point of explaining it to them – whether I’m asked or not – which is where Connie has learned her little speech from. Often, they are then prompted to ask a question like, “Does it hurt?” and I’ll explain that it doesn’t hurt her to have them on, but she did have to have an operation to put the special tiny computer into her head to make it work – which they usually think is pretty cool.

If an adult stares, I’m less inclined to say anything unless asked. I don’t want to make them feel bad or feel confronted about it. So why do I bother telling children? I guess I just feel like it’s easier to explain to kids. They have fewer preconceptions, and their response is usually one of wonder and amazement as opposed to pity, which is often the default of the adult. I don’t want Olive to be pitied – she doesn’t need it. You don’t pity people who wear glasses. By telling children (sometimes in earshot of their parents), I’m hoping to make them realise it’s okay for them to notice things that make people different. It helps them realise it’s okay to ask, and it helps them to start an interaction with me and with Olive instead of avoiding us. Deafness (and disability) need to be talked about more to make them less ‘scary’ and less taboo.

I try to think back to before we had Olive – would I have asked? Would I have told my child to shush or to look away if they were asking questions or staring at someone with a device? I’d like to think not, but I probably have been guilty of the ‘don’t look directly at them’ mentality. 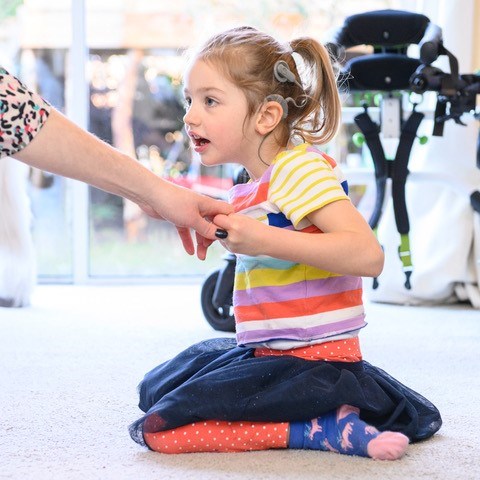 Now, when Connie or Olive see someone with an adaptation or aid, they sometimes point it out as a positive or ask me about it. Olive will shout, “Same like me!” when she sees someone in a wheelchair, and Connie will shout, “Olive, look! That person has an implant/hearing aid!”

They get so excited about these things in a positive way. Although I’m conscious it might be embarrassing that they shout about it in the middle of a busy shopping centre and point at the person, it makes me really happy that they know differences are to be celebrated and talked about. It’s not everyone’s response, and I know some people are less willing to answer questions when just trying to go about their daily lives, which is partly why I feel like if I’m happy to do it, why not?

Jennie and her husband Rhys both work with children with additional needs and live in Manchester with their daughters Connie (5) and Olive (4). Olive has quadriplegic cerebral palsy and is profoundly deaf with bilateral cochlear implants. Olive uses a mixture of sign, sounds and symbols to communicate and Connie uses a loud voice. Jennie likes it when it’s quiet enough to hear herself think!