My baby has a hearing loss? 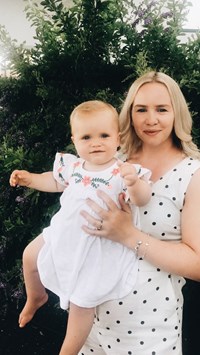 As the audiologist sat down and told me that she couldn’t pick up a response in either ear during my baby’s second newborn screening test, the words that followed seem to be a blur. My baby was deaf? Had she not heard me singing to her? Trying to console her when she cried? Would she ever hear my voice?

Let’s rewind back to the beginning.

We welcomed our beautiful baby girl into the world on the 26th July 2018. She was beautiful, everything I could have imagined and more. The following morning, I was preparing to go home when there was a knock at the door. The nurse had come to undertake her routine newborn hearing test. I remember it clearly, I was feeding her at the time. She did the test and reported back to me immediately that she couldn’t get a response but not to worry, she was still less than 24 hours old and it was very common not to be able to get a reading at this stage.

Once home, a few short days later, we received a letter in the post inviting us to an appointment to repeat the testing again. Two weeks passed quickly and I didn’t really think about it in the lead up to the appointment, I mean no one in my family had had any difficulties with hearing loss so it wouldn’t happen to my baby, would it? I had absolutely no experience at all, and so during the appointment when she said that she couldn’t get a response from either ear in either test, I was shocked. The walls seemed to close in on me and I needed to escape.

I left the hospital with a leaflet, a piece of paper that explained about hearing loss but it wasn’t sinking in. My husband had gone to collect the car and I rang my mum, I couldn’t quite gather the words but she tried to reassure me. I tried to keep it together in the car on the way home but the more I tried to fight back the tears, the tighter my chest became and the pain inside was unbearable. How could my little girl have hearing loss?

When you first find out such news, it’s not until a little further down the line when you’re referred for more tests that you find out the extent of the hearing loss. So up until that point we really had no idea what she could hear, if anything.

A few weeks later we went to the audiology department and went into a small soundproof room and the audiologist did an Auditory Brainstem Response (ABR) test. I had some idea what to expect as I had researched what would happen, although the internet made it sound a lot more daunting than it actually was.

In the lead up to our visit to the audiology clinic I was signposted to the National Deaf Children’s Society website. It’s full of information and helped us immensely. There’s a section for those who have just found out their baby has hearing loss which was a huge support.

From the tests, they came to the conclusion that she has bilateral sensorineural hearing loss. In one ear she has a moderate loss and in the other ear mild loss. They say it won’t improve and they can’t rule out that it won’t get worse. She can still hear us though, and is very responsive, although she may not always hear us clearly and so sometimes we have to alter the way we communicate. It’s often things you don’t think about like making sure she can see us when we’re talking to her and not being too far away from her when we speak.

Discovering our baby has hearing loss is one of the hardest things I’ve had to come to terms with during my parenting journey so far. There are always so many questions – did I get something wrong during pregnancy? Was there anything I could have done to prevent this? Some questions we’ll never have the answer to and some we will in time.

With the fantastic support out there from the likes of the National Deaf Children’s Society and others there’s so much information out there to support families just like ours.

Carlie is mummy to Indie who has sensorineural hearing loss. They're adjusting to life with hearing aids and constantly learning. Indie loves kicking a football around and they're hoping she’ll follow in mummy’s footsteps and be playing herself in a few years time!