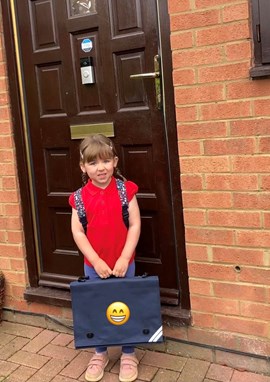 As the nights get darker and the colder weather draws in, in the blink of an eye it’s the holidays and Isabelle has completed an entire half-term at nursery! I’m thrilled to say, she loves it. That first day of drop-off was a mixture of excitement and the unknown, but she skipped straight in. She even took before and after school club in her stride, which thankfully is also attended by several of her classmates.

As every parent knows, getting information out of your child about their school day is akin to getting blood out of a stone! I tried a few tactics such as talking about my day, in the hope she would mirror my conversation. Yet, as the weeks went by, I found she was more likely to be triggered by a memory at another time which would lead to a sweet little story about something she did or who she played with – or of course that she had ice cream for school dinner! That's the best part of her day!

I’d been concerned about her hearing loss preventing her catching everything being said, as I often repeat information to make sure she has heard. The moment I relaxed was when, out of the blue one day, she recited an entire new rhyme that I hadn’t taught her. She'd understood every word at nursery – and remembered it! I’ve no doubt this is largely helped by her one-to-one learning support assistant, who is wonderful and adored by Isabelle. She’s even enrolled on a sign language course which was signposted by our Teacher of the Deaf (ToD). The class teacher has also been in touch with our ToD and is implementing the communication strategies she suggested. We have a Special Educational Needs (SEN) parents evening after half-term to hear about Isabelle’s progress, discuss her support plan and look at beginning Isabelle’s Education, Health and Care (EHC) plan ahead of starting Reception next year. All in all, I feel the school are really on top of Isabelle’s needs.

As we're both working parents and not always at the classroom door, communication with the staff could have been tricky. I suggested a communication book which could be left in her bag. Her one-to-one writes in it every week – this might be a little bit of information about the day or a question she has for us. In the same way we can write back, and this has been a huge source of comfort for the small control freak in me who likes to know what's going on! Especially when it’s the first time in Isabelle’s three-and-a-half years that she's had a life outside of us. The school also have an app which they upload early years observations to. The photos and videos from there are so lovely to see and often inspire Isabelle to tell us a little more about what she's been up to.

In terms of equipment, there have yet to be any issues. She always wears a retainer clipped to her clothes – it seems fair to save staff searching for missing processors through piles of lego or sand! We're holding back on a radio aid-type device at the moment as Isabelle develops the skill of picking out key sounds in a bubble of noise. Her class is quite small so she has a real advantage this year in terms of noise levels. I leave a spare set of batteries with the school just in case, and take them home to charge each week.

If ever I needed confirmation that nursery is a hit, it was Isabelle’s first words upon waking up this morning as she threw her arms in the air: “Yay, it’s nursery day!” I think you’ll be just fine my darling!