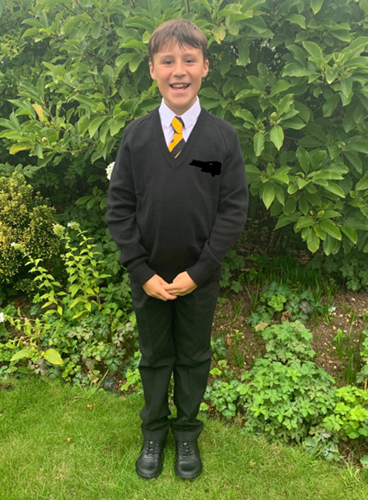 Due to fluctuating hearing loss and difficulties in knowing from one week to the next where Sonny’s  hearing levels were, we had concerns about the challenges he may face moving to secondary school.  Especially having to move around the school to different classrooms with different acoustics and layouts.

When developing his Education, Health and Care (EHC) plan we considered the right amount of support needed, whilst still taking into account the need for independence. This involved getting support from the National Deaf Children’s Society, his Teacher of the Deaf and both his primary school and chosen secondary school.

A soundfield system had been used in his primary school classroom previously. However, this had been easy to manage as he was in one classroom and didn't move around the school. Soundfields are amplification systems that allow the whole classroom, including hearing children, to hear the sound of the teacher better wherever they are standing. The system provides an even spread of sound. The teacher wears a transmitter and the sound is played through a number of speakers distributed around the classroom.

It was suggested that he has as many lessons as possible in one classroom. However, we wanted Sonny to experience moving around the school to different classrooms like everyone else at secondary school. In the end, a final decision was made to have a soundfield system in each of the classrooms at his secondary school. We chose a school with experience of teaching hearing impaired children with a lot of the equipment already in place. He then has the responsibility of carrying the transmitter between classrooms which he hands to each of his teachers as he moves around the school.

This was how we worked out what Sonny needed in his EHC plan.

As always, the National Deaf Children’s Society have been a great support throughout this entire process. We’re really pleased that Sonny now has the best chance of hearing his teachers during this really important next stage of his education, even if his hearing loss changes.

Lindsay is mum to Sonny (10) who has moderate hearing loss and wears hearing aids. Sonny has had glue ear for seven years and numerous grommet operations.

Sybil's back to school experience Keeping busy in lockdown 3.0 Cooking with your hands full The trouble with face masks Reviews: The Quest for the Cockle Implant