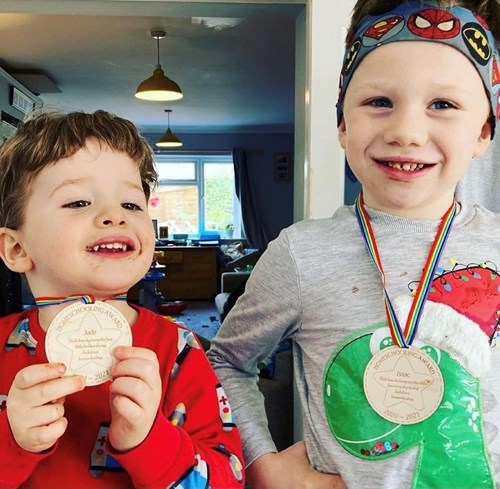 When my son Isaac was 18 months old, despite him having a hearing loss and hearing aids, everything was going smoothly. At each of his audiology appointments and Teacher of the Deaf visits, we were praised for how well he was coming along and his future was looking really good. We decided to try for another baby as we wanted him to have a brother or a sister and to grow our little family.

When Isaac was coming up to two years old and I was five months pregnant, we had his routine hearing appointment, little did I know that the news that day would change our lives forever. Isaac didn’t respond to the audiologist as he usually does, she tested him for glue ear but his ears were clear. We then received the devastating news that Isaac had lost his hearing completely, something we never thought would happen. The next series of appointments were a complete blur but we started travelling an hour and a half to hospital for Isaac’s cochlear implant assessments. He had an MRI when I was two days overdue with his little brother.

When Isaac was just over two years old, his little brother Jude was born. Having a newborn baby and a toddler who couldn’t hear was extremely difficult. I developed a lot of anxiety around going out with them alone because it was impossible to call to Isaac when he was running off, as toddlers often do. I couldn’t sit and feed his brother as I was always on high alert to what Isaac’s next unpredictable move was going to be. I was constantly battling with thoughts about whether I had done the right thing bringing another baby into the world when his older brother needed me so much still.

When Jude was eight weeks old, Isaac had his operation for bilateral cochlear implants. The operation ended up having a few complications and instead of going home that day we had to stay in the hospital for five days. Isaac was traumatised for the majority of this stay and barely allowed me to leave his side. I shared a bed with him while Jude slept in the carrycot next to me. I’ve never felt so torn in my life as I did between my two children in that hospital. Looking back I’m not really sure how I coped but as a parent you just get on with it and make sure their needs are met before your own. All I can say is that Jude slept like an absolute dream in hospital, which he had never done at home! It was like he knew what was going. That was the start of their amazing brotherly bond.

Jude has been there for all of Isaac’s post-implant audiology appointments and he was sitting on my knee the moment Isaac responded to sound again! He’s also sat next to him during all of his speech and language appointments at home. Jude’s speech is really good and I always wonder if that’s why.

Even now at three years old, Jude is so in tune with his brother’s needs and is a very easygoing and clever little boy. We’ve gone through some very difficult stages with Isaac, him learning to hear through his implants, starting school and home-schooling during the lockdowns, and Jude has just been amazing. He knows when to keep quiet when Isaac needs a listening break, he sits with Isaac when he’s feeling anxious and needs someone close by and he has always made us smile on the hardest of days.

Many times in the early days I thought I had done a terrible thing having a second child when I did, but now I’m so happy that I did and that my boys have each other. They have days where they scream at each other, but when one of them needs something the other one is always there. I really look forward to watching them grow up together, although Isaac thinks that Jude will be getting his own ‘special ears’ when he starts school too.

Esme is mum to Isaac who wears cochlear implants. Isaac was born with a progressive hearing loss which deteriorated to profound when he was two years old, he was implanted when his baby brother was eight weeks old. Esme and her family live in the Norfolk countryside and try their best to make the most of every day. They spend a lot of time outside, exploring the woods and the beach and Esme ran the London Marathon for NDCS last year!