Cooking with your hands full I love cooking and I love baking. I love them mainly because I’m greedy and I enjoy reaping the rewards. Since having children, I still enjoy cooking and baking as ‘me time’ but often now I’m joined by two little people who are keen to help and spend time with Mum. It’s a very different experience compared to pre-children...

Connie is a typically developing four-year-old. Olive is three and has bilateral cochlear implants. She also has quadriplegic cerebral palsy so can’t sit or stand unaided and is mostly non-verbal. Do not confuse non-verbal for quiet! She’s as noisy as her sister and just as communicative. We use a ‘Total Communication’ approach with her, this means signing, speaking and using symbols. She also has a voice output device, this is an iPad with symbols she can use to build sentences. I usually only involve the kids with baking, because we can mix everything cold so it’s safer.

When I first started bringing Olive into our little galley-style kitchen, in her big supported seat, I used to fob her off with a bowl and some bits to mix - dried pasta, flour, mixed herbs... random things she could mix, without interfering with what I was making, just as I did with Connie. The problem was, Olive was much quicker to pick up on visuals and she knew very soon that what I was making was different to what I gave her and she wasn’t happy about it. And she told me so! She also hated it if Connie was stood next to me helping, because she couldn’t do this, so I had to find a way to get both involved as equally as possible. I started by making sure I had space at the end of the kitchen so Olive could reach the ingredients from her chair and see all the things we were doing. 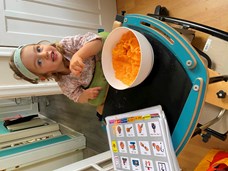 I used to get things out of the cupboard as I was going along, but with Olive there, it got too hard doing it that way. Instead, we get everything out first, weigh it all out into bowls, then mix it. It takes longer but it gives our baking a routine, so even when we’re making different things, Olive usually knows the pattern of what will happen next.

I always tell her what we’re making and read out the ingredients, signing as I go, when I know the sign… I keep meaning to find the signs for things like ‘vanilla essence’ or ‘baking powder’, but we cope. Each time I read something, I ask the girls where it is and we get it out ready to use. I’m a speech and language therapist, so this ticks the ‘teaching vocabulary’ box and gives lots of repetition of language as well as teaching the meaning of ‘where’. Olive loves it because it becomes a game to remember where we keep things.

They tend to take turns mixing things - their favourite is the ‘whizzer’ (the electric whisk) which they always turn up to high. I have to use countdowns by holding up my fingers ‘5, 4, 3, 2, 1 - finish!’ Because Olive probably can’t hear me over the whisk and, in theory, then they can’t argue about who has had a longer turn.

It’s more fun some days than others and it’s much messier and genuinely is a test of my patience to bake with the kids. Honestly, it’s not my first choice of activity to get them to do, but they really enjoy it. And even when I think it’s been awful, they always ask to do it again!

Most Saturday mornings, my husband, Rhys, makes pancakes with the girls and he does something similar to me - getting the ingredients out first and using a workspace for Olive. He tends to assign jobs to them. Olive does the mixing, because she finds that easier physically, and Connie does the pouring, because she can reach the worktop. They both help with weighing things out and they love watching the pancakes cook. Rhys talks about making sure the pan is hot enough, checking if it’s burning, talking about how it smells, the changes in colour and so on. It sounds contrived but it’s just what happens when you’re involving them and they’re inquisitive. Plus, being an occupational therapist, he loves that he’s teaching them life skills - because cooking pancakes is an important life skill! He always lets them choose what to put inside the pancakes. It’s a foregone conclusion that whatever is stickiest and sweetest is Olive’s choice and Connie will always choose lemon then change her mind to something more random.

On Shrove Tuesday, we try to have savoury pancakes first, but the girls won’t ever entertain that - Connie has been appalled by a cheese and ham pancake on the few occasions we’ve offered it.

The most useful thing I’ve found about letting the girls help in the kitchen, is that it teaches us all to wait. It often takes longer to do something with them than it would on my own and I’ve gradually come to learn that that’s not a bad thing - especially in a third lockdown! They’re so much better at waiting while the other one has a turn, or waiting while something cooks. They know the routine, they know they will get a go but they just enjoy the time with us while they’re doing it and that’s the best bit. Well... second best after eating what we’ve made!

Jennie and her husband Rhys both work with children with additional needs and live in Manchester with their daughters Connie (5) and Olive (4). Olive has quadriplegic cerebral palsy and is profoundly deaf with bilateral cochlear implants. Olive uses a mixture of sign, sounds and symbols to communicate and Connie uses a loud voice. Jennie likes it when it’s quiet enough to hear herself think!