Coping with the 'terrible' twos 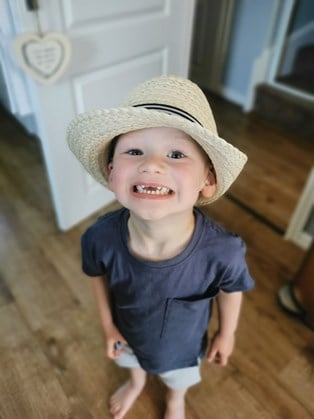 I have been extremely lucky with Kenzie and his behaviour, most of the time he’s a loving and caring well-behaved little boy. But now he’s hit the ‘terrible’ twos, he does have the odd tantrum! This is mostly when he gets frustrated and can't get his own way, he definitely likes to push his luck sometimes and finds it difficult to understand why he can’t have something.

To help manage his behaviour and to help him better understand his emotions, I’ve introduced a few new things at home. Kenzie is very visual and loves playing with pictures and stickers, so I created him his own reward chart focusing on the main things he does throughout the day, such as eating all of his dinner, getting himself dressed or using the potty. If he does these things well he gets to add a picture to his chart, and throughout the day he can see how many he has built up. 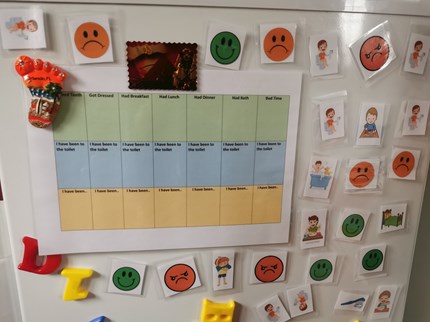 I have also included colour faces to show his behaviour. If he’s being a good boy and has helped me prepare the dinner, for example, he gets to add a green smiley face to his chart. If I can see he’s starting to get frustrated, I show him that he has an orange face and I try to talk to him and calm down the situation before it reaches a red angry face to show naughty behaviour. At this point, the naughty step is also introduced. When sitting him on the step I explain why he’s been asked to sit there. I tell him that when he feels happy again, we can carry on with what we were doing.

I think these sorts of things are important as repetition helps Kenzie understand his behaviour and what is and isn't acceptable. However I think the best thing to help him is spending time sitting down with him and listening to why he may be angry or sad. I don't believe in shouting or being angry as this just escalates the situation.

Kenzie knows all the British Sign Language (BSL) signs for emotions such as ‘sad’, ‘happy’ and ‘angry’. I simply ask him, ‘Is Kenzie OK?’ and he will tell me ‘Yes mummy, Kenzie happy,’ or ‘No mummy, Kenzie sad.’ I then sit down with him on my lap and ask him why he’s sad. He normally tells me what's wrong and we talk about it and have a cuddle and then he says, ‘Kenzie happy again now.’

The most important thing is praise and reward and I tell him all the time how he’s made mummy proud. If he does something well, like using the potty, Kenzie and I jump around the room with our arms up in the air shouting ‘Yay!’, dancing around and having fun. He loves this and understands that he’s done something well and is very pleased with himself.

I involve Kenzie with everything, he loves being my little helper!