Kenzie’s first time on an aeroplane 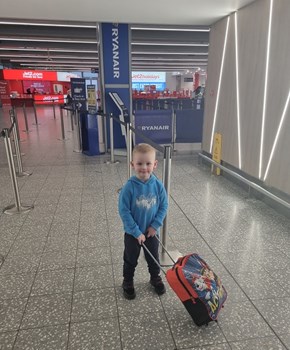 Last week we went on a little family holiday to Spain, and Kenzie experienced his first time on a plane. I wanted to book somewhere close with a short flight time to ensure he was OK with flying. I had to declare his hearing impairment at booking which meant he was booked under assisted boarding.

Kenzie was so excited and packed his little suitcase with all of his toys, and we counted down the sleeps until it was time to go.

We flew from Bristol, and they were amazing and so supportive. At the check-in desk, they said we could have an extra hand luggage bag for his cochlear kit. And security made the whole process very exciting for Kenzie: as he wasn't able to go through the scanner, they took him to one side and made his ‘pat down’ a tickle game so he didn't feel uncomfortable.

Unfortunately, our flight was delayed a couple of hours which led to a very late night, but Kenzie was given access to the sensory room where he was able to play and had the whole room to himself. He didn't mind being delayed and loved every second! 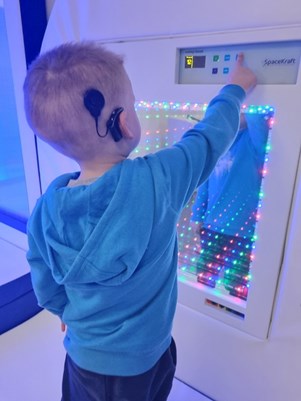 As we were assisted boarding, we were first on the plane, so Kenzie got to see the plane empty and was able to get settled in his seat. Unfortunately, as the plane filled and the volume of talking got louder and louder, Kenzie did get a little upset and said, "It's too loud, Mummy" and passed me his ears. This only lasted for a few minutes before he asked for them back and said, "I'm OK now, Mummy." Once he got used to the noise, he was very excited and loved the whole experience from take-off to landing. We also experienced some turbulence along the way which he found very amusing, laughing about and jumping up and down. I on the other hand didn't enjoy it so much!

He was so well behaved and talked to everyone he could on the plane, making friends with the cabin crew and people around him. Everyone commented on how good he was. 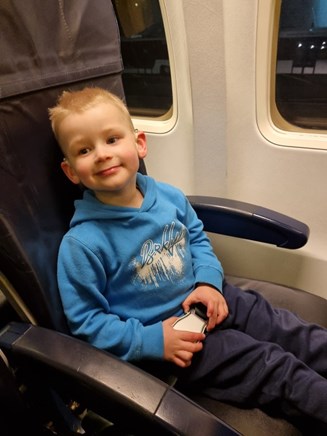 When we were on holiday, he got lots of attention from the locals, and we even met another little Spanish boy who had an implant (although very different to what we have in the UK).

I was worried about travelling home and if it would be as smooth sailing, but again the airport staff were very helpful and fully supportive by putting Kenzie at ease.

I am so glad that he enjoyed the experience, and I wouldn't hesitate in booking a longer flight in the future. I made sure that I had travel insurance, his cochlear identification card and his kit with me, including the manual batteries as a backup if needed. Cochlear do offer a service where you can pay for a spare processor to take with you in case of emergencies, but I decided not to do that on this occasion. However, it would definitely be worth it if travelling for a longer time.

I can't wait for our next family adventure! 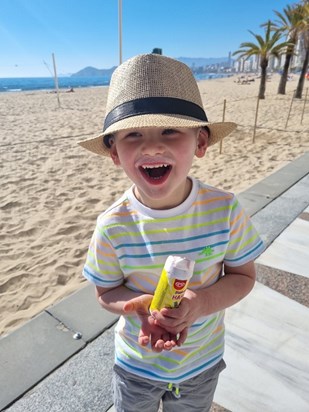