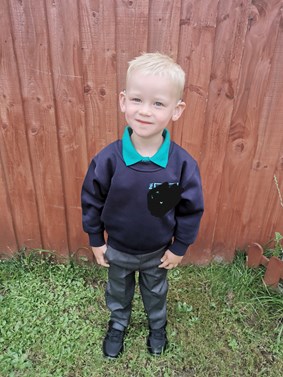 Wow, where has the time gone? I can’t believe Kenzie is three already and starting big boy school! He’s been going to nursery three days a week since he was seven months old so is used to being in a group environment with other children. I was really worried about putting him into nursery and leaving him at such a young age, but being a single full-time working mum I didn't have much choice. However, no matter how hard it was for me to leave him with other people, and I constantly felt guilty for doing so, it’s definitely the best thing for Kenzie. He’s thrived in nursery over the years and has grown to be such a clever, cheeky and sociable little boy. He loves being around other children, playing games and having fun. He also loves learning new things and being challenged to do a task. He gets very pleased and proud of himself when he learns something new. In fact, Kenzie is very bright and can get bored easily, so he needs constant interaction. He’s developing so well with his speech and language, as you will know from my other blogs, and a big part of this is down to the nurseries he’s been in along the way.

Deaf children can be withdrawn, shy and not always able to react well in social situations, especially with loud group environments. But thankfully this isn’t the case for Kenzie, he loves being with his friends and is often described as being the loudest character in the group.

Today he went off to his new big boy school, he looked so adorable in his school uniform. When we tried it on a few weeks ago, he stood in the mirror looking very pleased with himself and asked: “You proud mummy?” That set the water works off! “Of course I’m proud monkey, you make me proud every single day.” He honestly shocks me every day with something new, like a new word he’s learnt or a new game he can play.

As I dropped him off at the school gates, I waved him goodbye as he walked into the playground. He stopped and looked at me for a few seconds, but as I waved him on, he knew he would be fine. Off he went to his new class with new people he had never met before, without so much as a tear. He’s incredibly brave and makes me so proud.

When I picked him up this afternoon, he had the biggest smile on his face and said: “School is really fun mummy.” He then chatted all the way home telling me about his new classroom and his teachers and friends. I couldn't be happier.

There’s lots of support out there for deaf children at school, each child is different in what support they will need. Kenzie has a one-to-one tutor for a few hours a week to help him develop his speech and language.

I can’t wait to see how much he grows and develops over the next few months now he’s in big boy school.