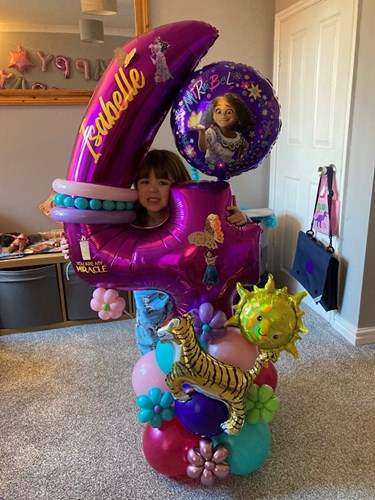 Sparkly dresses, chocolate cake, goodie bags… it can only be party season for my socialite four-year-old! It’s her first proper round of parties since she was a year old due to the ongoing pandemic. As a result of these missed opportunities, near enough every friend is having a gathering in 2022. As we tentatively enter another echoey village hall filled with joyful shouting over the roar of the bouncy castle, my husband and I wistfully reminisce about the time when Saturdays meant a peaceful lie in and wander round the shops grabbing a coffee! In truth though, I love taking Isabelle to these parties. Experiencing the excitement that surrounds celebrating her friends turning a year older seems like a childhood rite of passage.

Yet looking back over my description – ‘echoey,’ ‘shouting,’ ‘roar’ - parties can be fairly tricky to navigate with their exceptional noise levels. This is probably true for most people in fairness, but harder still for those with a hearing loss. As Isabelle has grown older, it’s become clear she socially thrives in a 1:1 playdate: there are no incidental conversations to follow, little background noise, and it’s a much easier hearing environment overall. At nursery it’s loud, but she has 1:1 support to ensure she’s able to follow everything. Then there are parties.

If I’m honest - despite being deaf myself - it hadn’t really occurred to me that she may need a hand navigating parties. Now that she’s a little bit older, I’m not naturally hovering over her every move. But when we attended our first party of the year, there was a visiting ice queen, and I quickly realised from afar that Isabelle wasn’t able to hear the instructions of the game over the bouncy castle. I slipped quietly behind her and repeated everything Elsa was saying directly into her processor. Sure enough, a minute later she won a prize as she was able to answer a question. It was just a case of meeting her needs.

At another party, once again the cacophony of sound made conversation almost impossible. I noticed she wasn’t really interacting with her friends as she would do in a different environment. Perhaps it was too much effort. She sidled up to sit with me after a while and revealed she was finding it noisy. I suggested she remove her processors for a sound break which she duly did, chowing down some party food in that time. She’s very resilient - it didn’t affect her enjoying herself, but it did change how she participated and her reliance on me.

Recently it was her own birthday party, and I had already organised months earlier a bouncy castle and Elsa/Anna to run party games. I hadn’t really considered whether it was the best option for her hearing because I was too focused on choosing activities I knew she would love. At the beginning of the party, she wasn’t sure of the entertainment because, once again, she found it hard to follow. I quickly passed her baby brother to a grandparent so I could sit with her and explain each game. This gave her the confidence to participate and let her relax as she wasn’t having to concentrate quite so much.

When she’s older, and I’m not at every party, we might look at using a mini mic for the party entertainer. Perhaps she’ll have good friends who can keep her in the loop. We’re learning as we go and as she hits every milestone, and we’ll target any issues as they arise. In the meantime, she’s excited for tomorrow’s disco party and already wants to wear high heels - such a cliche! If you need me, I’ll be wrapping presents and Googling spa breaks for 2030!