As your children get older you’ll want to see them develop into independent young people in control of their own lives and safety. A home alerting system can be useful to let them know what’s going on around the house and prepare them for safely living on their own.

Alerting or paging systems are made up of transmitter products and receiver products. Transmitters send signals to the receivers, which pick up the signal and alert the deaf person using light, sound or vibration. For example, when detecting smoke, a smoke alarm transmitter sends a signal to a receiver such as an alarm clock. The alarm clock then alerts the deaf person with a specific light, sound or vibration pattern. This pattern is different from alerting to other transmitters, such as the doorbell. There are many different transmitters and receivers, and you can mix and match.

The Bellman Visit alerting system is available to borrow from our Technology Test Drive.* Jessie (17), Lily (16) and their parents tried it out. Jessie and Lily are both profoundly deaf and wear cochlear implants. 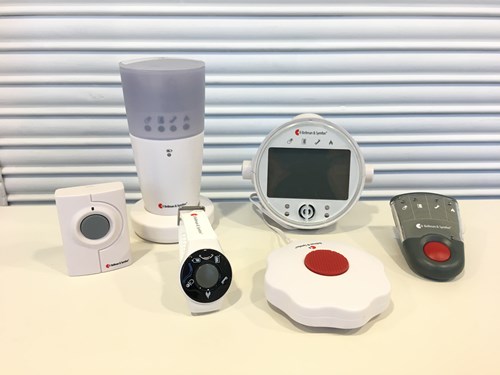 How did you find setting up and using the system?

Lily: Really easy! It’s one of the biggest things I loved about it. As soon as I took it out of the box it worked. The instruction manuals are very visual. The only complication is if you live next door to another household that uses the same system you’d then need to change the radio frequency on which your system works.

Parents: Lily set up the system on her own. She was explaining it to us and we were really impressed; it looked really simple. I think that young deaf children could use it easily; it’s very family-friendly.

Which parts of the system did you use?

Jessie: I used the pager receiver to be alerted to things. You can clip it to your belt so it’s not really visible which is nice. It didn’t feel like a ‘piece of deaf tech’. I used it with the push-button transmitter. It looks like a doorbell push-button, so you can put it at the door and be alerted when someone presses it. My parents also used the pushbutton in the house to ‘call’ me, so they don’t have to text me or come to find me. I like being able to go around the house and be notified of the doorbell or when my parents want me! I didn’t use the receiver that alerts me to messages or calls on my mobile phone as I’m always by
my phone.

Lily: I tried the alarm clock, the pager and the wrist receiver. The wrist receiver is comfy to wear and it’s portable and works with vibration like the pager but I prefer the pager because it’s practical: I can easily clip it on and off. The push button transmitter can alert multiple receivers at the same time, so my sister could wear the pager and I could wear the wrist receiver or I could get another pager. You feel the vibration and then you’re like, “Oh I need to go downstairs.” It’s really good to let you know when tea is ready! I can relax around the house and not need to put my processors on. It saves my parents a lot of hassle as they find it quite annoying when I don’t put my processors on! I also like the flash receiver to alert me to things. It’s like a siren. It flashes a bright white light but there are individual small lights which flash different colours depending on what it’s alerting you to. I wouldn’t use the portable receiver as I find it a bit clunky and not very subtle.

How did it help you?

Jessie: I like knowing what’s happening when I’m around the house. I feel a lot safer and it reduces stress and anxiety across the whole family. I’m going to university next year and will move away from home and my biggest concern is if there’s a fire and I’m alone. This system is designed to help someone live on their own. I’d like to have the alarm clock and pager connected to a smoke alarm and the doorbell. It will ease my worries and I’d feel more ready for living alone.

Lily: The vibrating alarm clock has made my mornings so much easier as I can take control of waking up and my parents can relax, knowing I’ll wake up. I’ve been telling my friends about it and they think it’s cool that the alarm clock vibrates. If we had the smoke alarm I could take my processors off and still be safe. My parents wouldn’t need to have people over to look after us when they’re out. It would make life relatively easy. I’d like to have two or three push-buttons and receivers, including one by the bathroom – so important for privacy!

Parents: We’d like to purchase this system as it’s made our life at home so much easier. When dinner is ready we used the push-button and they’d receive an alert and come down to get food. The alarm clock supports their independence as we don’t have to wake them up. It has showed us how independent the girls could be. We like the idea of the smoke alarm as it means we can go out and leave Lily and Jessie in the house and they will be safe. We also feel reassured about their capacity to cope living alone as they get older.

*For safety reasons we don’t include the smoke transmitter in the Bellman Visit system on our loan service.