Jovita finds herself stuck in the middle. A 15-year-old British Sign Language user from London, she is a part of a deaf family yet goes to a mainstream hearing school. It’s a position which she decided to write about for the BBC Young Reporters’ competition, leading to her becoming a finalist in the contest.

“I got involved through the Youth Advisory Board,” Jovita recalls of the moment when she first learned about the competition. “I got an email from [the Participation team at the National Deaf Children’s Society] asking me to do it, so I thought ‘oh, why not, I’ll do it then’.” 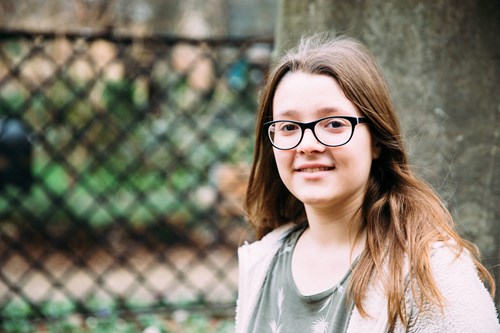 Her idea about being stuck between the deaf and hearing world, she says, was a metaphorical one. “My parents were entrenched in this deaf world and I was sucked into the hearing world, but I didn’t feel like I belonged,” Jovita explains, “while staying with the deaf world, I didn’t feel like I truly belonged as well, because my parents went to a deaf school and they were a part of the deaf community, and I never got the experience to go to a deaf school.

“I couldn’t really understand their enthusiasm for the deaf community,” she continues, “but now I understand why because… access, really. You could understand everyone, it’s very close-knit, and it’s a nice atmosphere when you’re with them, whilst in the hearing world, it’s so big and no one really understands your deafness as much.

“So I wrote about how I felt, and what it was like being trapped in almost like a limbo, essentially. Then I ended up writing up a mini conclusion saying that, eventually, I will choose one of these worlds, but I just need to find a way how to.”

I ask her if she’s decided now. “No,” she replies. “I’m still in mainstream school, but when I leave in March, when I’m older.

“Right now I can’t because I haven’t had the experience that I need to know,” she adds.

For Jovita, she decided to apply as someone who has never seen any deaf people on the BBC who has had the same experience as her. “I’ve never seen their experiences being shared,” she explains. “It was often me thinking I’m alone, and no one could really empathise with me, so I wanted to do it so that other deaf young people can see that there are people out there who are going through similar circumstances.

“You’re not alone and we can try and get on with it, because we’re not isolated, there’s loads of other deaf people out there.

“That’s what I wanted to do,” she adds. “I wanted to show them that they’re not alone, essentially.

“I’m quite proud of myself for getting this far because usually I have very low expectations.”

So, when her expectations were surpassed, she was gobsmacked. “I was like, ‘wow, how is this even possible?’ It was just a really happy, positive memory. I got that far because of my deafness, and it was like something changed inside of me.

The BBC Young Reporters competition is now open for 2019. To apply and find out more, visit the BBC News website.

Liam is a Campaigns Officer at the National Deaf Children’s Society. He is mildly deaf, and wears hearing aids in both ears.

Deaf Children Today survey – how do we use the results? Face masks in schools: A Scottish parent’s campaign win Deaf friendly remote learning: a checklist for teachers Returning to school after the coronavirus lockdown Beating unemployment Coronavirus and support for deaf children – information for professionals Information about Coronavirus (COVID-19) Using radio aids at home Bath time with your deaf baby or young child How to support your deaf child playing with their hearing siblings Having your say: Evidence from families published by two parliamentary inquiries What higher education providers can do to ensure remote learning and assessment is accessible to deaf students DIY face masks with clear panels Caring for your child’s hearing aids at home The impact of face masks on deaf children How professionals can get involved with Deaf Works Everywhere Help us support deaf children and young people Should there be a right to a radio aid? Improve the lives of other deaf children