What other types of hearing aids are there?

Photo: There are different types of hearing aids available

Bone conduction hearing aids (BC hearing aids) are suitable for children who have conductive deafness. This could be caused by microtia (malformation of the outer ear), atresia (malformation of the ear canal), chronic ear infections or long-standing glue ear. They’re also suitable for mixed deafness or unilateral deafness.nlike behind-the-ear hearing aids, BC hearing aids vibrate in response to sound received by the microphone. These vibrations are then transmitted through the bones of the skull to the cochlea where they’re converted into sound in the usual way, therefore bypassing the outer and middle ear.

Most hearing aids are described as water resistant, meaning they give some protection against sweat and any brief exposure to water. Water resistant hearing aids are usually given an IP57 or IP67 rating and therefore aren’t suitable for immersing in water or for wearing during activities in water. For more information on IP ratings go to en.wikipedia.org/wiki/IP_Code.

Fully waterproof digital hearing aids (with an IP rating of IP68) are available for certain types and levels of deafness. Waterproof aids are great for active lifestyles as they offer protection at the beach, in the sea, at swimming pools, in the playground etc.

Water resistant hearing aids are widely available through the NHS.

Open fit hearing aids are behind-the-ear hearing aids that are worn on special ‘open’ earmoulds or soft ear tips (known as a dome or mushroom tip).

Open earmoulds are made to fit from ear impressions in the same way as conventional earmoulds. They hold standard tubing that carries sound from the hearing aid and into the ear. They’re designed to channel sound into the ear canal without blocking external sounds around the wearer.

Alternatively soft ear tips in a range of sizes may be used. The sound is channelled from the hearing aid to the ear canal using a very thin tube (microtube). This design is more cosmetically appealing to some wearers but may not be as secure in the ear as an earmould. This makes them suitable for older children or teenagers.

Instead of a typical earmould, a thin electrical wire replaces the flexible tubing and connects the hearing aid to a small earpiece in the ear canal, housing the receiver.

An advantage of receiver-in-the-ear hearing aids is that the microphone and receiver are further apart so there’s less chance of feedback. Also, because the receiver is removed from the hearing aid, the behind-the-ear part can be smaller, making it less noticeable on the ear.

However, they may be less secure to wear than a behind-the-ear hearing aid, and the wearer will need to check the earpiece and receiver daily for wax to stop faults occurring. They aren’t suitable for people who have problems with discharging ears.

Receiver-in-the ear hearing aids don’t have a direct audio input facility although some do have the T (telecoil) programme. For these reasons they are most likely to be used by older children or teenagers and are usually suitable for mild and moderate to severe deafness. 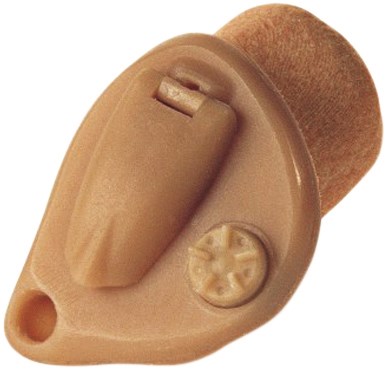 In-the-ear (ITE) hearing aids are more likely to be suitable for older children who have a mild to moderate hearing loss. Your child’s audiologist will be able to tell you whether one would be suitable for your child.

All of the parts of an in-the-ear hearing aid are enclosed in the shell, which is custom-made to the user’s ear and looks very like an ordinary earmould. Most of the shell fits inside the ear leaving the faceplate facing outwards.

Because all the parts need to fit inside the shell, the child’s ear canal needs to be large enough to take an in-the-ear hearing aid.

Generally, in-the-canal (ITC) hearing aids are smaller and less noticeable than in-the-ear aids. The shell (which is custom-made for each user) fits into the canal part of the ear.

Because of their small size, in-the-canal hearing aids aren’t suitable for young children. In-the-canal aids may have fewer controls than other hearing aids and don’t have a direct audio input facility. However, some do have a T programme.

Children with a profound unilateral (one-sided) deafness may benefit from a special type of hearing aid known as a CROS aid (contralateral routing of signal). Although it’s described as a hearing aid, a CROS aid doesn’t amplify sound. It simply transfers sound from the deaf ear to the side of the hearing ear.

The main advantage of using a CROS aid is that it can help the child to hear sounds from all directions. A CROS aid includes two units which both look like ordinary behind-the-ear hearing aids.

However, the unit worn on the deaf ear just contains a microphone. It’s connected to the other unit, usually by a wireless radio link. The child listens to the sounds picked up by the microphone through the second unit, which they wear on their hearing ear.

BiCROS aids are suitable when there’s no useful hearing in one ear and the other ear has some deafness.

Spectacle aids are rarely used by children. They combine a hearing aid into the arms of a pair of glasses. These aids are produced for the convenience of people who need to wear hearing aids, as well as glasses, all of the time.

Vibrotactile aids are sometimes given to children who have little or no hearing and who wouldn’t benefit from using a more conventional hearing aid or cochlear implant.

Vibrotactile aids rely on the sense of feeling, with a processor unit picking up sounds through a microphone. The sounds (in the form of electronic signals) are then amplified. A wire connects the processor to a vibrating transducer that responds to incoming sounds. The transducer is worn against the skin, on the wrist or across the chest, where the vibrations are felt.

A vibrotactile aid can give your child a sense of loudness, which helps them to monitor and control their own voice level. It can also give the child a sense of the rhythm of speech and sometimes of the frequency of sounds. For further information regarding the Tactile Acoustic Monitor (TAM) please go to www.summitdeafaids.co.uk/Products.php.