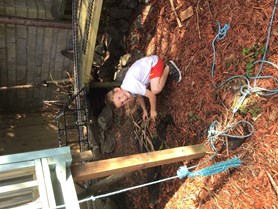 Like many families, self-isolating has become a bit of a theme over the last few months. At one point 760,000 children were self-isolating, so what do you do when you’re alerted to another period of self-isolation with multiple children? Scream, yell, swear this isn’t fair! No, you accept it and make a plan. Here’s my diary of a recent time of isolation with Oliver, hopefully it will give you some ideas for how to fill the time.

Day 1: Oliver tells me he’s good at making plans, so we plan out our 10 days of self-isolation.

Day 2: Cooking. Oliver loves making cakes, so we make a coffee cake. Oliver was a bit heavy-handed with the blender, and the flour ended up going all over the floor, in his shoes and all over the oven! But he enjoyed weighing out the ingredients (which was a maths lesson, even though he didn’t realise it). It took 30 minutes to make the cake and two hours to clean up the mess. But at least another day is over.

Day 3: Making. Oliver loves Star Wars so we emptied all of our old cereal boxes and collected all our old toilet rolls and Oliver decided to make a Lightsaber. This was fine until he decided to paint it, and then use it before it had dried! Talk about caught red handed! ‘Learning tomorrow?’ asks Oliver. ‘We did arts and crafts today,’ I say! 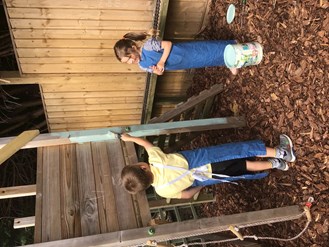 Day 4 and 5: It was the weekend so Oliver had his siblings to play with in the garden and around the house, thankfully!

Day 6: Clearing the garden. Due to the wet weather, all the trees and bushes have overgrown so Oliver decided to cut back some of the bushes and make a bug hotel. I asked Oliver to draw a plan of his bug hotel and write down how he was going to make it, we then added in the bugs he was going to attract. Although Oliver has a radio aid at school he can’t always hear the correct sounds, so it was good to get Oliver to sound out his bugs and write them down. Oliver went into the garden, collected the sticks, leaves and grass and we waited and waited for the bugs to go in. We are still waiting. ‘Learning tomorrow?’ asks Oliver. ‘We did reading and writing today,’ I say!

Day 8: We’re nearly there! Oliver is bored, he wants to go to the park but we can’t, he wants to play with his friends but he can’t. Instead he goes on the iPad, for a short period of time whilst I try and think about what we can do. Oliver comes over and says can we do a treasure hunt. Yes! We get lots of pens and paper, and Oliver draws the garden and goes and hides the treasure. We use the terms ‘hot’ if he’s close and ‘cold’ if he’s far away. I go out in the garden and start looking for the treasure, he’s left pieces of paper with arrows around the garden for me to follow. After many, ‘Nanny you are cold,’ or ‘Nanny you are hot,’ I eventually find the key, covered in mud! 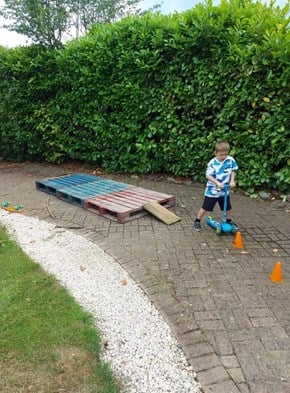 Day 9: Building. We have some old pallets outside so Oliver decides to make an assault course with the pallets, pieces of wood and some mini cones. He uses the pieces of wood so he can ride his bike up onto the pallets and back off the other side, he places his football near to the cones and jumps off his bike and dribbles the ball around the cones and scores a goal. Oliver is really pleased with himself building the assault course and can’t wait to show his siblings. ‘Learning tomorrow?’ asks Oliver. ‘We did PE today,’ I say!

Day 10: Last day of self-isolation. Poor Oliver has missed his friends, missed going to the park, missed his swimming lesson and can’t wait to get back to normal life, so today I tell him he can do whatever he wants. Perhaps it will be sleep like nanny? No… It’s go on the iPad. He’s very quiet, maybe he’s gone to sleep? No he’s set up my iPad so it goes straight into his hearing aids. At least I don’t need to hear some American voice shouting! We’ve finally made it to the end of isolation!

Maria is nanny to Oliver (6), who became deaf when he was three and wears hearing aids, and Thea (4) and Lara (1).